The Next 30 Leading Startup Ecosystems

Get a deeper look at startup ecosystem trends in our full 2019 Global Startup Ecosystem Report.

In the past decade a lot of the discussion about startup ecosystems has been centered on the question of who will be the next Silicon Valley.

There are many promising places and today, there are five ecosystems that have as much VC funding in startups as Silicon Valley had in 1998 — the year Google was founded. In addition to the five below, Los Angeles and Tel Aviv are not far behind.

There will be no next Silicon Valley, instead there will be 30 hubs distributed around the world, reaching critical mass driven by either regional (e.g., Singapore in Southeast Asia) or Sub-Sector leadership (e.g., San Diego in Life Sciences).

While none of them will be as big as Silicon Valley in the foreseeable future, each will thrive.

“Instead of one new center or two new centers (of entrepreneurship, besides Silicon Valley), there will be 30, and there will be clusters in different places that don’t quite get to the density of the Bay Area but get beyond critical mass.”  - Sam Altman, Y Combinator and OpenAI

So who will the Next 30 be? We cannot know exactly, but we have some clues.

The top 30 global startup ecosystems of today are a good place to start. But they are not the only ones, and they should not feel safe in their position at the top. There is considerable movement among them, and some ecosystems outside the top 30 have a real shot of making the list in the future — we call them Challenger Ecosystems. The Global Startup Ecosystem Report covers trends about these places in more detail in the Overall Rankings section.

Beyond the Next 30 and the $4 Billion Barrier

In 1964, Roger Bannister became famous as the first person to ever run a 4-minute mile — breaking a barrier that had stood for decades and many thought humanly impossible to reach. Once he showed it could be done, the same barrier was broken by John Landy, an Australian runner, only 46 days later. Once Bannister showed the possibility, that level of performance that had never been done for decades became achievable. Since then, over 1,000 runners have completed a 4-minute mile.

As more cities around the globe become viable startup ecosystems, we think a similar situation might be happening.

Between 2014 and 2016, 29 ecosystems created over $4 billion in Ecosystem Value. Today, between 2016 and 2018, there are 46 ecosystems creating that level of economic impact through their startups.

Interestingly, we were able to identify fewer than 15 startup ecosystems at that level of performance in 2012. While historical data on this is tricky, it is hard to imagine more than a few startup ecosystems creating that level of Ecosystem Value in the 1990s. As Pitchbook data shows, Boston had about $900 million in VC investments in 1998, New York City had $800 million, and both Seattle and London had only about $200 million in investments in the same year.

By definition, the list of top startup ecosystems will always be limited. But what this $4 billion barrier in Ecosystem Value shows is that many places, all over the globe, have a real shot at building thriving, local startup economies.

We predict about 100 cities will cross the $4 billion threshold in Ecosystem Value in the next 10 years. Many of those are covered in the 2019 Global Startup Ecosystem Report.

In the Global Startup Ecosystem Report we rank the top 30 global startup ecosystems — the highest-performing cities and regions across our Ecosystem Success Factors.

The list is far from static, and we see considerable movement in, out, and within the rankings. Even when an ecosystem moves down the rankings, it is often due to the gains of others. There is real competition between regions for talented founders, experienced employees, investment capital, and attention. Startups are dynamic, and the ecosystems in which they operate match that dynamism.

To capture the dynamism within our rankings, and convey the rapid growth taking place all over the world, we classify startup ecosystems into four general types. Within these general types are also sub-types.

Leaders are the ecosystems among the top seven in the world, with strong performance across most Ecosystem Success Factors, each of them creating at least $30 billion in Ecosystem Value, with a median of $56 billion.

Three of these top seven ecosystems are what we call New Elites: New York City, London, and Beijing.

While each has deep entrepreneurial roots, they have grown consistently since our first analysis in 2012, when they were not among the global top 3 ecosystems. New York City has solidified its status as a leading startup ecosystem, with London and Beijing in a tie for third. 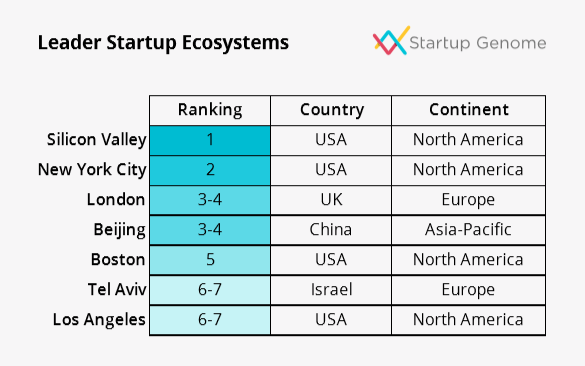 Major Hubs are well-established global cities that have startup ecosystems ranked in the top 25 and a history of high performance. Among the 13 Major Hubs, nine have been consistently ranked in the overall top 20 since 2012.

There is a good deal of competition among these ecosystems. Venture capital, once an overwhelmingly American industry, has globalized. This has eroded the relative standing of cities like Chicago and Seattle, even though their startup ecosystems remain strong. In Europe, Berlin was once the undisputed hub in the continent after London. In the past few years, driven primarily by strong performance in Deep Tech, Paris and Stockholm have strengthened their positions relative to Berlin.

The rapid development of technology and ecosystems in China has shifted the regional balance in the Asia-Pacific region in the past seven years. Although seeing recent declines, Vancouver and Sydney remain Major Hubs thanks to their historically high performance.

Among the Major Hubs, three ecosystems stand out for their growth over the past seven years and their rapid movement up the rankings. We call these Risers: Shanghai, Stockholm, and Amsterdam. Each was outside the top 20 in 2012 and is now ranked in the top 15 in 2019. 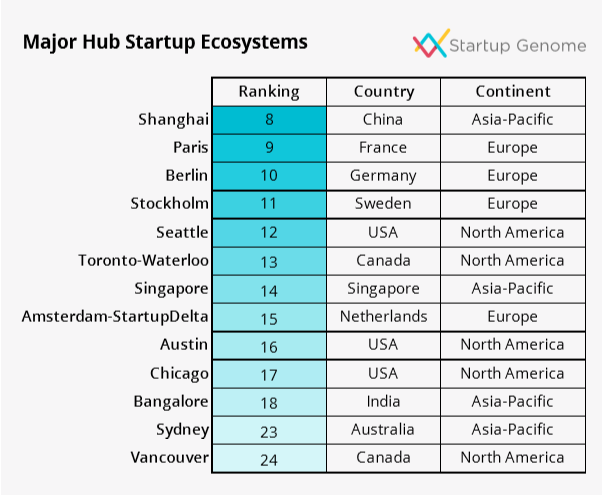 Momentum Ecosystems are those places that have never been part of the top global startup ecosystems since 2012 but have now cracked the top 30.

Some have been on the cusp of the top ranking, such as Denver-Boulder and Atlanta, which were runners-up for the top 20 list in 2012. Several Momentum ecosystems have experienced growth driven by strength in specific sub-sectors. Munich, for example, is a top 10 ecosystem in Advanced Manufacturing & Robotics (the fastest-growing sub-sector globally), and San Diego is the third-ranked ecosystem in Life Sciences. (See our analysis of Life Sciences ecosystems in the Global Startup Ecosystem Report.) 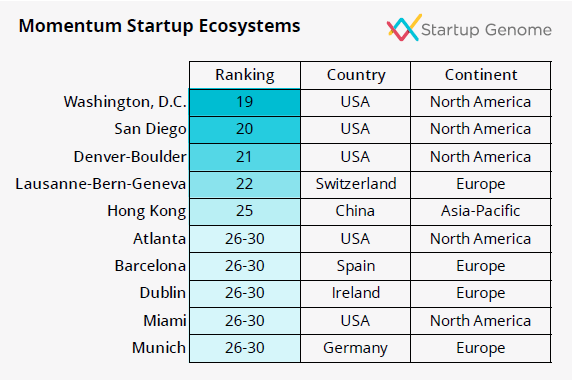 So who are the Next 30? What ecosystems show the potential to make the top 30 within five years? For the answers, we look at the Challengers, ecosystems currently outside the top 30 ranking but growing rapidly.

This is a diverse group, with Lagos and Jakarta alongside Moscow and Melbourne. There are giant urban agglomerations (Tokyo, population 38 million) and rather small ones (Greater Helsinki, population 1.5 million). The juxtaposition is a good reminder that startup ecosystem performance is not simply a function of population size or GDP. They’re related, but the startup ecosystem in São Paulo can generate just as much success as the one in Montreal.

Each Challenger Ecosystem has at least one company in the billion-dollar club (unicorns and exits). They also share key characteristics: 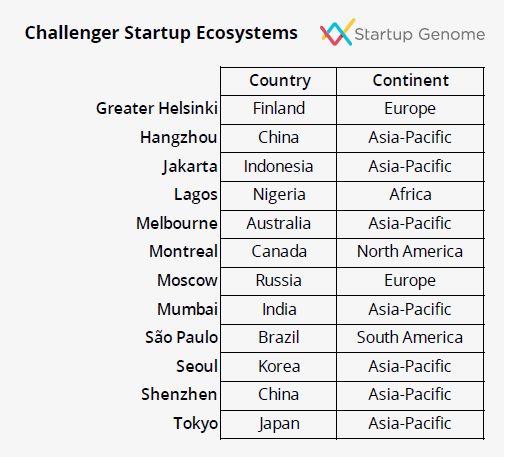 Get a deeper look at startup ecosystem trends in our 2019 Global Startup Ecosystem Report.