A Fast-Changing Industry Means Greater Opportunity for Women in Agtech

The opinions expressed in this article are the author’s own and do not necessarily reflect the views or position of Startup Genome.

Founder, From Farms to Incubators
An award-winning writer for the women’s agriculture and Agtech movement, Amy Wu is an entrepreneur and storyteller bridging the action in the field with the digital advances in the office and laboratory. From Farms to Incubators is a multimedia platform that uses documentary, video, photography, and the written word to tell the stories of women leaders and innovators in Agtech. It has a mission of highlighting women in food, farming, and farmtech, especially women of color. 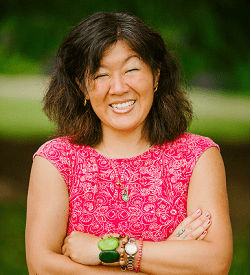 A perfect storm emerged over the past few years — one that combines sustainability, climate change, and a fast-growing interest in food systems. Factors that have fueled this include COVID-19, challenges involving supply chains and access to fresh locally grown food, and growing consumer interest in how food is produced and who grows it. Around the world, farmers are under pressure to produce enough food to sustain a global population forecasted at 10 billion by 2050, and they are increasingly seeking technology-driven solutions.

The upshot of this is that there is ample opportunity for innovation, and a new generation of women are stepping up to create solutions to farming challenges. Many of these women come from STEM backgrounds, and they want to make a difference in food systems. This alone is a paradigm shift as decision-making roles in agriculture have traditionally been held by men and, on the whole, the field continues to be male dominated.

However, the number of female-founded Agrifoodtech startups (this includes Agtech, Agbio and Foodtech) has risen significantly over the last two decades, according to data released by AgFunder. In 2002, just 9% of the 259 Agrifoodtech companies where AgFunder had gender data had at least one female founder or co-founder. In 2022 about 22% of 1,061 companies had at least one woman on the founding team.

This is excellent news — diversity of lived experience in founding teams and greater gender parity can only be a good thing — but how can we keep the momentum going? What is needed to transform a trend into real change?

Storytelling as a Platform

In 2017, my documentary short From Farms to Incubators made its premiere at a screening funded by the International Center for Journalists at the Western Growers Center for Innovation and Technology. The audience consisted of leaders in government, Agribusiness, higher education, the farming community, and my colleagues in the press (at the time I was a journalist for The Salinas Californian).

After the film screened, there was silence. Then, one by one, the audience members turned to each other and discussed how they had no idea that women were creating innovations to help farmers. Even the women on the speakers’ panel — the same ones featured in the film — said that they had been unaware of each other's existence.

This experience and my passion for elevating women leaders in Agtech gave birth to From Farms to Incubators, an initiative that uses storytelling to empower and connect women in this fast-growing sector. Art in any form serves as a vehicle to awareness, outreach, and perhaps change, and I see this storytelling as a platform to get more women involved in Agrifoodtech and agriculture.

The documentary extended into an art exhibition at the National Steinbeck Center — I rallied artists and photographers to contribute their talents toward celebrating women in Agtech. From there, the project developed into a book, From Farms to Incubators: Women Innovators Revolutionizing How Our Food Is Grown, which includes 30 profiles of female founders in Agtech.

The film, exhibition, and book have spawned hundreds of events, some that involve screenings and panel discussions, and others where I serve as a keynote speaker or panelist. I often invite the women I’ve interviewed to share their stories. It takes a community to create lasting change, and I hold true to the belief that the more the merrier. In parallel, I continue to collect stories in the hope of documenting a moment in agricultural history and in the hope that it will encourage more women to literally enter the field.

Practical Support for Women in Agtech

Storytelling isn’t enough to create lasting change. Resources, tools, funding, and mentorship are critical to cultivating a new generation of women leaders in agriculture and Agtech.

In 2020, I was a part of launching the Women in Agrifoodtech Directory. A joint effort among a small group of women leaders in Agtech including Connie Bowen of AgLaunch, Pam Marrone of Marrone Bio Innovations, Louisa Burwood-Taylor of AgFunder, Danielle Gould of Food+Tech Connect, and Sarah Nolet of Tenacious Ventures, the directory makes it easier for women in Agrifoodtech to connect with each other, along with investors, growers, and Agribusiness leaders. There are now over 700 names in the directory.

There is power in numbers, and it takes a community to drive change. To inspire the next generation of women to consider opportunities in Agrifoodtech, the focus needs to be on creating tangible tools that they can use — more resources, more connections, and more bridges towards funding and collaborations. This is the true power of the directory, which has yet to be fully realized.

A lot has changed in the Agtech sector in recent years. Farmers in the U.S. and elsewhere are embracing new innovations to help them operate and grow more efficiently. This includes using drones for aerial imaging and land surveying, tools for collecting data on invasive species and nutrient deficiencies, and robots that plant and harvest to tackle labor shortages.

The word Agtech has been extended to Agrifoodtech, as the sector now includes more innovation related to Foodtech and Agbio. The Agrifoodtech sector has also grown in terms of investment — according to AgFunder, Agrifoodtech startups globally raised $24 billion in the first half of 2021 alone, close to the amount raised in all of 2020. There is a strong demand for investments that focus on climate, sustainability, and food security. The pandemic has also sparked wider interest in food systems and supply chains from consumers. To some degree, everyone has experienced disruption in food supply in recent years.

This is a sector full of opportunities for investors, entrepreneurs, and those who want to explore careers in the space. Agtech offers opportunities for a more diverse workforce as it requires skills and talents that are more varied than in traditional agriculture. It opens job opportunities to segments of the population who have traditionally not been the leaders and key decision-makers in these sectors. My hope is that this expansion brings more women to the table.

A Growing Community of Women in Agriculture

I am often asked what happened to the women featured in the film and the book. Out of the nearly 40 women profiled, the majority remain in the food ecosystem, whether it be continuing to grow their venture, serving as a leader in Agribusiness or the food industry, or entering policy.

Shefali Mehta of Open River Consulting Associates was named the USDA Deputy Undersecretary of Research in 2021, and Beth Bechdol is the Deputy Director General of The Food and Agriculture Organization under the United Nations.

Some sold their startups and moved to other ventures — Christine Su, the co-founder of PastureMap, sold the company in 2020 and now works at Twitter. Others forge forward to build their companies — Poornima Parameswaran, the co-founder of Trace Genomics, was named president of the company in early 2022. Martha Montoya, the founder of AgTools, and Ellie Symes, the founder of The Bee Corp, have strong presences in major industry organizations including The World Ag Expo.

There’s also a tremendous pipeline of new female founders who have graciously shared their stories with me in the hopes of inspiring the next generation of women. The names are multiplying, and at times I feel I can’t work fast enough to keep up with the momentum — a good challenge to have!

There’s no doubt that agriculture remains male dominated, but with increased awareness of the need for sustainable food supply, growing global access to new technologies, and dedicated initiatives to support women in the Agtech sector, I am confident that a paradigm shift is well underway.