In this member spotlight, we look at Greater Helsinki’s success in Gaming, AI, Big Data, & Analytics.
Sofia Kousa
on July 24, 2019

As the capital and most populous city of Finland, Greater Helsinki is the world's northernmost metro area with over one million people. The city is an attractive place to work and live for its Scandinavian lifestyle, low cost of living, and affordable technical talent.

Startup Genome’s 2019 Global Startup Ecosystem Report highlights Greater Helsinki as a top 10 ecosystem for Connectedness. Each year in late November or early December founders and investors from around the world gather at Slush, a world-renowned startup event thrown in Greater Helsinki. Slush is a non-profit student driven event created to generate an increasing number of startups and ideas to solve the world’s biggest socio-environmental issues. In 2018, Slush gathered 20,000 attendees from 130 different countries for the two-day event.

One of the engines behind the growth of the startup ecosystem in Greater Helsinki has been success in the Gaming industry. The most famous digital games that have originated from Finland are Angry Birds and Clash of Clans. Those games have been played by over a billion people around the world. Hatch, a spin-off of Angry Bird’s creator Rovio, secured investment from Japanese mobile operator, Docomo, for an undisclosed amount in 2019. In 2018, Small Giant Games, was acquired by Zynga in a deal worth up to $700 million.

Not surprisingly, Startup Genome’s 2019 assessment of Greater Helsinki identifies Finland among Europe’s top three countries in digital game development. The country has around 250 Gaming enterprises and 30 of them exceed $1 million in annual sales. Equally important, Greater Helsinki is seeing success in AI, Big Data, and Analytics. In fact, in 2017 Finland was the first EU country to publish a National AI strategy. In addition, Reaktor and the University of Helsinki created a free AI education program which had approximately 90,00 people from 80 different countries enrolled in the first four months. Ultimately, the course “Elements of AI” became Finland’s most popular online course.

A noteworthy AI startup in Greater Helsinki is Giosg, a software company that combines data and AI to provide a customer behavior tool. They raised $5.3 million in venture funding led by 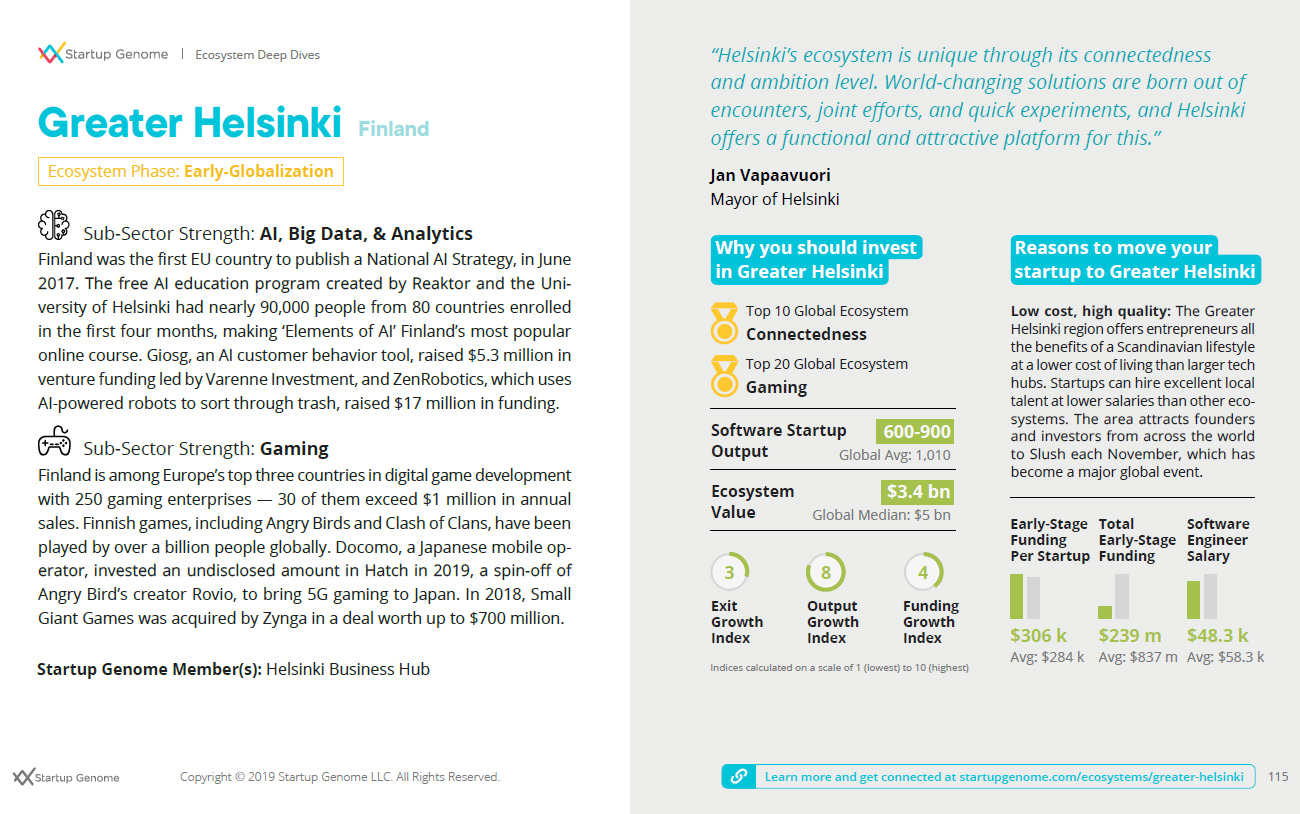 Some interesting data points found in our 2019 assessment of Greater Helsinki’s startup ecosystem include:

Startup Genome’s local member in Greater Helsinki is the Helsinki Business Hub. They are an international trade and investment promotion agency for the capital region of Finland. Helsinki Business Hub helps foreign companies come to Finland and set up their business to grow and develop in Greater Helsinki. They specifically help the ecosystem through access to financing, piloting opportunities, corporate and startup collaboration, and a laundry list of other services and programs that are all free of charge.

“Helsinki’s ecosystem is unique through its connectedness and ambition level,” Jan Vapaavuori, Mayor of Helsinki, said. “World-changing solutions are born out of encounters, joint efforts, and quick experiments, and Helsinki offers a functional and attractive platform for this.”

Would you like to become a startup ecosystem ambassador for Greater Helsinki? Please get in touch with us.