The Top Global Fintech Ecosystems of Today and Tomorrow

Many would argue that 2018 was ‘peak’ Fintech. We can see that growth in funding and deals has slowed in 2019 (particularly in Seed and Series A), and in some categories we have seen a decline — most visibly in the number of exits globally (whilst value remained strong). Indeed, in last year’s Global Startup Ecosystem Report we classified Fintech as a ‘mature’ subsector, expecting early-stage funding to slow down and for later rounds and exits to continue to perform well as winners continue to be identified and capitalised.

But this is only part of the story. There are, broadly speaking, three types of Fintech markets. Established’ markets - largely concentrated in Europe and North America - are characterized by fintech development in places abundant in legacy institutions, financial infrastructure and regulation. Here, a wave of Fintechs emerged after the Financial Crisis as a response to the failure of major banks, insurers and wealth managers to digitalise, focusing instead on a growing regulatory burden. Regulators in the UK and US were the key enablers of the Fintech ecosystems in these countries, allowing Fintechs to unbundle financial services and compete with incumbents. This led to a competitive and innovative market of single-product offerings but one with relatively poor user growth and penetration (compared to Asian counterparts) as European and North American regulators have been equally concerned about their prudential responsibilities and data privacy protection. According to Kantar ‘Future Finance’ report, only 1-3% of consumers in the UK, Germany and France banked with a digital only challenger bank (neobank) in 2019. Meanwhile, this figure stood at 93% for China. As a result, the route to profitability for many Fintechs in Europe and North America, and particularly neobanks, has been painful. This is exemplified by Monzo’s June announcement flagging concern in its ability to continue as a going concern despite continuing stellar user growth. The sector is pinning its hopes on re-bundling financial services, effectively offering a similar array of products as traditional players. In ‘Established’ markets we have seen a steady increase in the number of unicorns as multiple companies compete for the scale needed to move to this new model. Much of the early-stage funding, particularly at Series A, is likely now driven by B2B companies that enable the bundling of services for both financial and non-financial players, companies such as Truelayer or Thought Machine.

‘Developing’ markets are the broadest category. These Fintech ecosystems have a relatively new (or underdeveloped) financial infrastructure and limited regulatory regimes. In these markets early Fintech solutions often came from non-financial players (particularly telecoms and e-commerce) and only now are seeing deeper growth led by policy change to ensure these solutions become part of the core financial systems.

Finally, China is a Fintech market of its own, both due to the sheer size of the domestic market as well as the ability of Fintech firms to use both financial and non-financial data in ways that allow the creation of wider platforms and ecosystems of services. As a result, behemoths such as Tencent and Ant Financial have been created and alternative banking solutions have gone largely mainstream - the volume of payments processed by Ant Financial in 2019 was almost 24 times larger than PayPal’s global payment volume according to Statista and Ant Group’s recent IPO prospectus. The existence of these giants may explain the fall in early-stage funding as fewer niches remain underserved.

Ultimately, financial innovation has reduced barriers to entry into Fintech and both ‘established’ and ‘developing’ Fintech markets are heading toward convergence of financial and non-financial players in offering services to consumers and businesses, particularly thanks to the push toward Open Banking.

Whilst Fintech was maturing in 2019, the COVID-19 crisis has the potential to give new wings to the sub-sector. According to one survey published by the US payments company Plaid as many as 69% of Americans said Fintech solutions provided them essential support during the COVID-19 pandemic. The crisis may have accelerated Fintech adoption in some economies. Startup Genome’s own COVID-19 impact survey, which we began in April 2020, showed that Fintech was amongst the sub-sectors relatively less negatively impacted by the crisis. But perhaps more importantly, the pandemic has also accelerated trends that enable Fintech to grow in the medium and long term, particularly through the expansion of e-commerce, cybersecurity and wide-scale changes in consumer behavior (such as an increase in remittances and a move away from cash). As a result, the unit cost of cash transactions across economies is set to increase, whilst the cost of electronic payments will continue to drop, creating economies of scale for solutions directed at online and offline retail.

The picture is not universally rosy, however. Profitability was already problematic for most successful Fintechs in 2018-2019, raising questions about valuations. The crisis also brings renewed scrutiny of the value Fintechs offer their customers. Long gone are the days when acquiring users was as simple as having a nice interface. Individuals as well as SMEs have new expectations of what constitutes core services. Incumbent companies may have resisted digitalisation historically but are now being forced to go ‘all in’ to compete on digital propositions. We can expect increased activity in the sector in 2021.

The top 5 global Fintech ecosystems are Silicon Valley, New York City, London, Singapore and Beijing - this is out of over 270 startup ecosystems that we studied for this report.

The top 20 Fintech ecosystems are displayed in the accompanying table. Ecosystems are scored and ranked on five success factors, which are broken down and explained below. These 20 ecosystems outperform ecosystems from the rest of the world in providing Fintech startups with well-resourced environments in which to succeed.

No single region dominates this year’s ranking, although the US is by far the strongest performer at country level with six spots in the top 20. North American ecosystems account for 7 of the top 20, and European ones for 5. Asia-Pacific contributed 7 ecosystems. The overall ranking shows there is wide variation across some success factors but a tighter distribution across others (this is explored further below).

The three most important success factors with an ecosystem’s ’s overall score are Performance, Funding and Talent & Experience. Interestingly, two ecosystems that are in the top 20 for Fintech are not in our overall top 30 ecosystem ranking: Jakarta and Mumbai.

New York City beat London on Performance by having the most Fintech exits in the last 5 years, as well as the second highest number of exits over $50M. New York City also came 2nd for series B funding and 3rd for early-stage funding (by deal count). It’s notable, however, that London outperformed New York City in the number of unicorns.

Singapore has strengthened its position as a global Fintech hub (and taking a lead over Beijing). Singapore’s position in the ranking has been driven by conscious investment in the ecosystem through early-stage funding, including the Financial Sector Technology and Innovation Scheme launched for the first time in 2015 and relaunched this year to commit another SGD 250M. Shanghai is trailing Beijing closely thanks to high scores across series B funding, exits over $50M, as well as the number of unicorns.

Outside of the expected leading Fintech ecosystems, we also see Jakarta, Mumbai and São Paulo making it to the top 20 thanks to improved exits over $50M and funding. Jakarta has also produced two unicorns, Mumbai one, and São Paulo three in the period studied for the report.

Comparing 2019 to previous years, we can see that 2018 was a record year for the creation of Fintech unicorns. The increase was largely due to a bumper year in China, which became the first country to produce the same number of $1B+ companies as the US. However, the US has seen a steady increase in the number of unicorns produced each year, whilst 2018 seems to be an exceptional year for China. This may be due to the Chinese Fintech market being driven by a smaller number of very large companies. Chinese Fintechs are typically focused on the domestic market, whilst US unicorns are often companies that aim for global expansion. As a result, there is more scope for competition.

In 2019 another 20 Fintechs globally achieved unicorn status (compared to 22 in 2018), bringing the total of Fintech unicorns created since 2014 to 77. Europe has finally started to see consistent growth in the number of unicorns since 2017, and we can also see the emergence of $1B+ companies in South America (including Nubank in Brazil) and other Asian countries (excluding China).

Overall, the growth in Fintech funding is slowing down globally. Early-stage (pre-seed, seed and Series A) has plateaued almost everywhere. The median Seed round in 2020 (up to August) has not changed since 2019 and stands at $500,000 indicating that early-stage investors have become more selective. The median Series A round has increased slightly from $4,279,000 in 2019 to $5,000,000 in 2020.

We analyzed funding data at both the global and regional level by using a 2-year rolling average to reduce the impact of outliers. In the case of Series A we saw that while the number of rounds increased in 2018-2019 compared to 2017-2019, the total value of funding remained flat. The increase in the number of Series A rounds has been true across all regions except for China, which has seen a drop.

Series B+ funding has seen a clear increase in both the number of rounds as well as total funding value with the sharpest increase in total funding value coming from the US, Europe and South America. China is the only region that has seen a drop in Series B+ funding from 2018 to 2019, but this is largely due to an exceptionally successful 2018, including Ant Financial’s $14B funding round amongst others. In Europe and the US, the increase in funding at Series B+ has been led by direct-to-consumer digital banks with Chime, SoFi, Klarna, Oaknorth and Nubank all receiving investment of between $400-500M.

Fintech has remained a strong contributor to the global startup economy having delivered constant exit growth until 2018. We have seen a dip in the number of Fintech deals in 2018-2019 versus 2017-2018. However, Fintech’s share of overall exits has continued to increase in that time, and Fintech exits account for 19% of global exits across all subsectors in 2018-2019.

The following map shows the top 5 ecosystems, in alphabetical order, based on their rank in the overall Fintech ranking. In addition to ranking the top Fintech ecosystems, we studied over 40 member ecosystems to identify their competitive advantages (i.e. sub-sector strengths) based on a mix of quantitative (e.g., funding, exits, talent, focus and legacy) and qualitative analysis (founders, experts and policymakers in the ecosystem) referred to as Ecosystems to Watch. 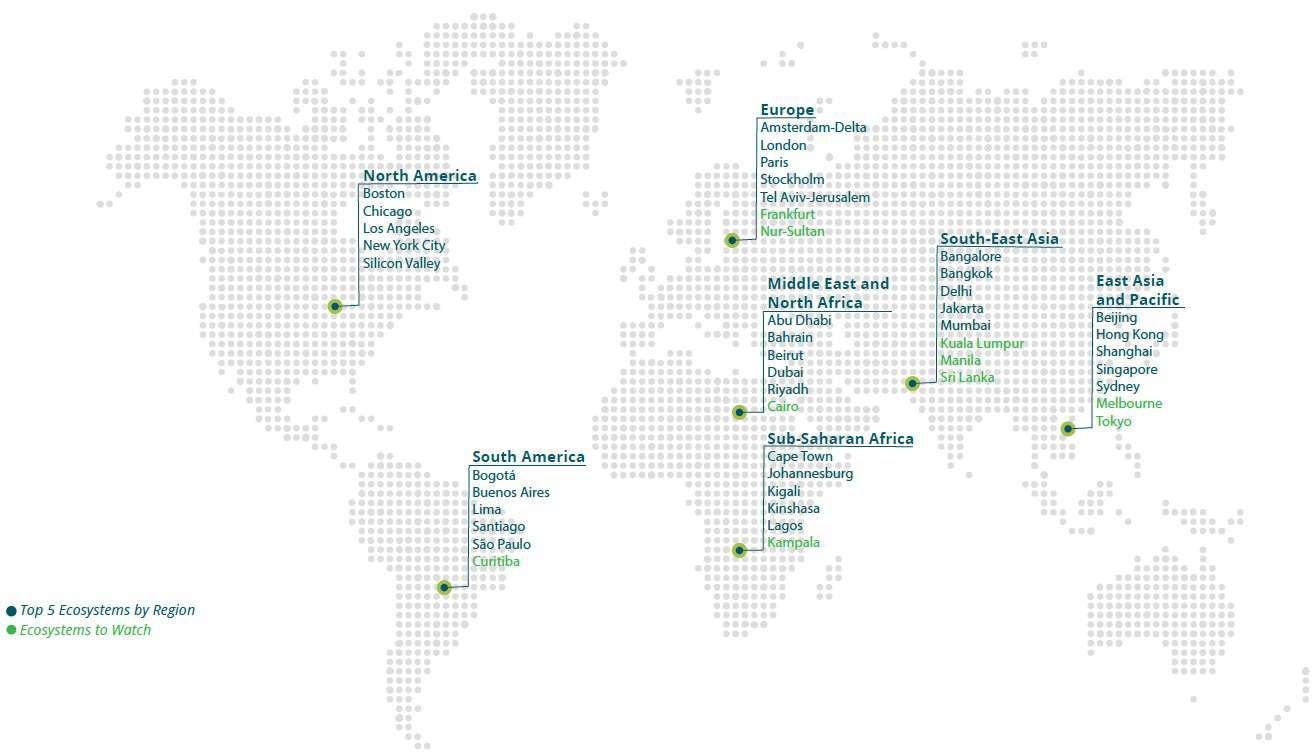