During the past ten years, Taiwan has pursued an agenda strongly focused on building up its national economy and the local economy of its capital Taipei City, with encouraging results. GDP has grown year over year from 2010 to present, with more growth projected ahead. For example, Taiwan has forecasted its GDP to increase by 2.46% in 2019 and projects GDP growth of 2.58% in 2020.

Secondly, the country has focused on fostering talent in areas such as Pharmaceuticals, Life Sciences, and Robotics. Thanks to Taiwan’s strong R&D background and deep talent pool, Taipei City appears to be a great place to grow technology startups in these areas.

Besides these two factors, Taipei City also has attracted talent because it is considered a good place to live, with high ratings in housing, business freedom, and economic success. Taiwan has been ranked #1 in The Best Places for Expats survey in 2019, due to easy settling in and working, family quality of life, and personal finance, according to InterNations' Expat Insider report for 2019. One thing that has boosted this rating is that the Taiwanese government selectively offers foreign talent an Employment Gold Card, which combines an alien resident certificate, resident visa, work permit, and re-entry permit.

Due to its high specialization, Taipei City is now rated as a top 25 global ecosystem for Advanced Manufacturing & Robotics. This makes sense given that Taiwan makes 75% of personal computers, 50% of LCD screens, 25% of semiconductors, and 20% of smartphones globally. Also, Taipei City is home to some of the largest electronics manufacturers and developers in the world, such as Acer, Asus, Foxconn, and HTC. One recent success story that shows off its Robotics prowess is local company Robotelf Technologies winning the CES 2018 Innovation Award for its home-use robot Robelf.

Moreover, Taipei City ranks as a top 30 global ecosystem for Artificial Intelligence. Besides big global names like Microsoft, which is spending over $30 million to build an AI research and development hub there, Taiwan is home to startups involved in AI. One of the most promising startups is iKala, which raised $5 million in a Series A round in 2018, followed by a $10 million Series A+ round in 2019. The company a leading Google Cloud partner in the Asia-Pacific region and a Facebook Global Marketing Solution Partner. 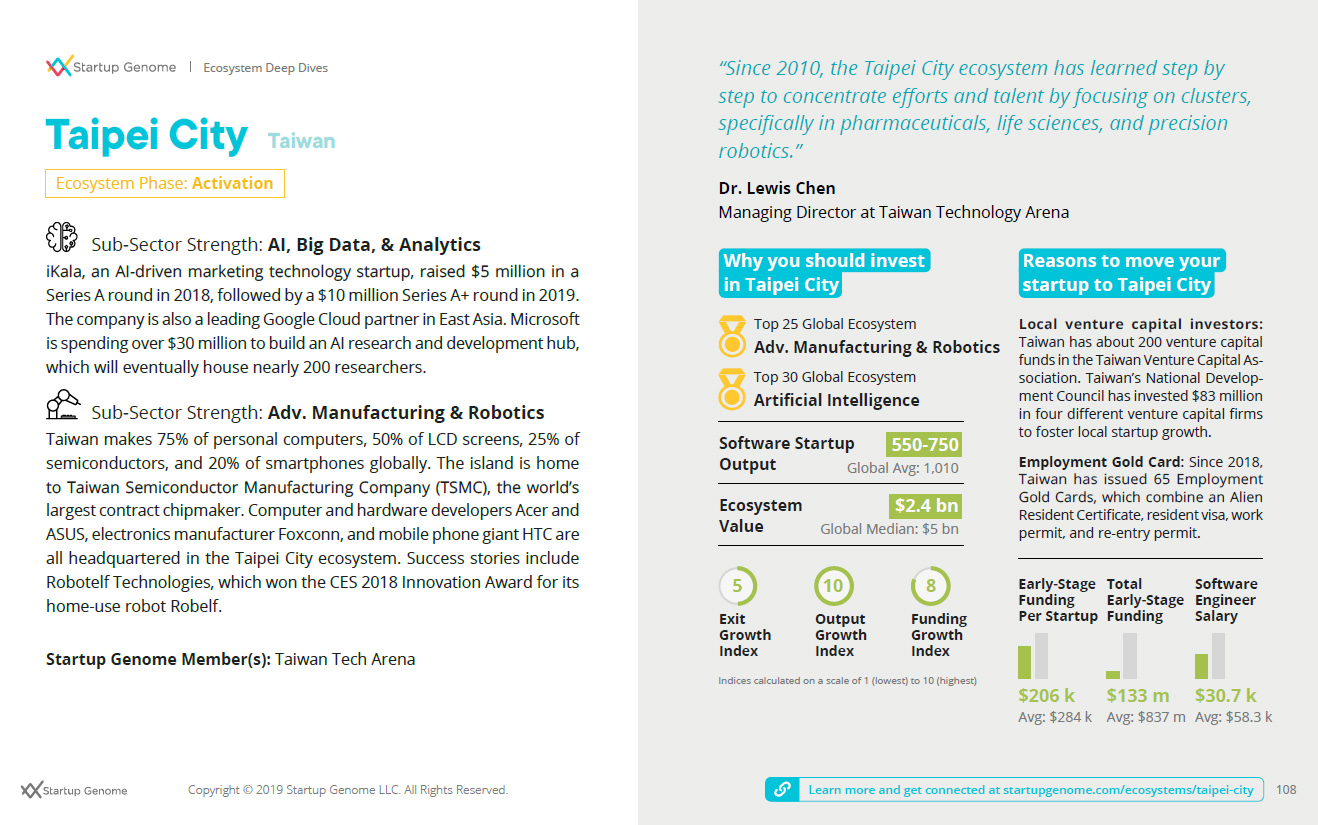 Some additional data points about Taipei City ecosystem from our 2019 assessment include:

Our member Taiwan Tech Arena (TTA), which was launched by the Ministry of Science and Technology, represents one of the diverse government initiatives to strengthen Taiwan’s innovative startup ecosystem. By fostering high-tech entrepreneurship in sectors like AI, semiconductor manufacturing, and software development, Taiwan Tech Arena is helping raise the country’s profile as a major tech-focused incubation center. TTA champions entrepreneurship and innovation to build a vibrant international startup ecosystem in Taiwan.

Want to be more involved in the Taipei City startup ecosystem? Become a Startup Genome Ambassador! Please get in touch.