How New York City’s Startups Have Become a Global Force

New York City is known for many things — the Statue of Liberty, the World Trade Center, a diverse population of nearly nine million people across five boroughs, inspiring Broadway shows, and of course, pizza. While those are notable, the city is also known for its energetic and robust startup community.

There are many reasons why about 9,000 startups currently call New York City home. The city and its businesses are well-connected to the world and 47 Fortune 500 companies are based there. It also has 410,000 women-owned businesses and a tech workforce that is nearly 50% foreign-born, showing NYC’s diversity bonafides.

New York City ranks second in global startup ecosystem funding and fourth for Life Sciences startups globally in Startup Genome’s 2019 Global Startup Ecosystem Report. The city has a strong talent base that is fueled by its more than 120 universities, and in fact more than 5 million residents in the city are aged 25 and up and have at least a Bachelor’s degree. NYC also had more than 7,500 computer science graduates in 2018 alone.

While New York is known for success in a variety of industries, three startup sub-sectors are on the upswing there, including AI, Big Data, and Analytics; Cybersecurity; and Life Sciences. In the area of AI, New York has a higher percentage of AI and machine-learning jobs than any other U.S. metro area. Datorama, an AI-powered marketing intelligence platform, was acquired by Salesforce for a reported $800 million in 2018.

In the Cybersecurity sub-sector, more than 100 companies and over 6,000 employees are represented in NYC. Cyber NYC, a city-led initiative to catalyze and create 10,000 jobs, is a $100 million public-private investment that TechCrunch described as “a bold attempt to put New York City on the map for cybersecurity,” with its emphasis on “talent development, founder development, and customer development.” One notably recent NYC cybersecurity startup is Medigate, a medical security platform, which raised $15 million in funding in 2019.

When it comes to Life Sciences startups, the Big Apple is a natural fit. The city has more than 50 hospitals, over 100 research foundations, and nine academic medical centers. One extremely notable Life Sciences startup exit belongs to Flatiron Health, which was acquired by Roche for $2.1 billion in 2018. 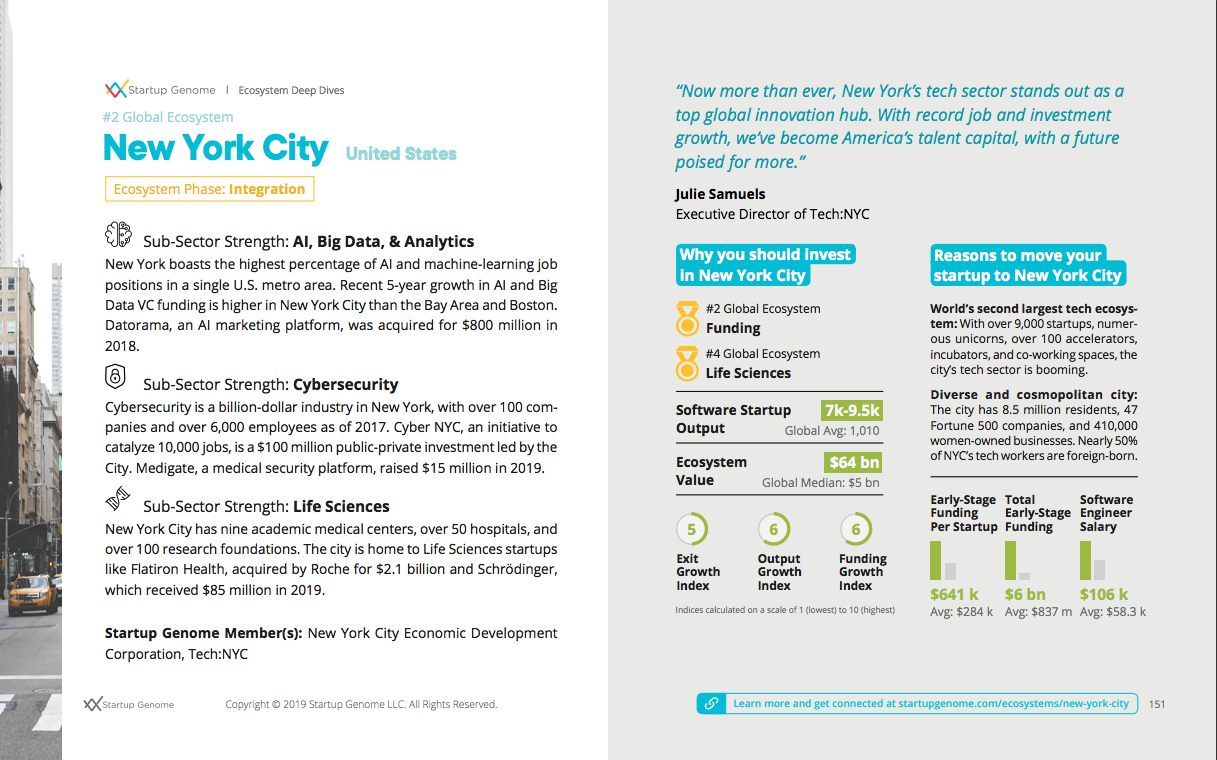 In our 2019 assessment of New York, we ranked the city against 40 other startup ecosystems. Highlights include:

Our local Members in NYC are New York City Economic Development Corporation (NYCEDC) and Tech:NYC. They are both are doing great work building and supporting the startup community. NYCEDC is behind initiatives like the aforementioned Cyber NYC, supports community spaces where new industries can thrive, and many other projects. Tech:NYC is an engaged network of tech leaders that are working to foster a dynamic, diverse, and creative New York, and the organization represents more than 750 tech companies based in NYC.

Want to be more involved in the New York City startup ecosystem? You can become a Startup Genome Ambassador. Please get in touch to find out more.