How Miami Is Empowering Its Diverse Startup Ecosystem

Miami is a fascinating coastal city. It serves as a gateway to Latin America with more flight connections to LATAM than any other U.S. city. If fact, eMerge Americas, the first tech-focused conference uniting the U.S. and Latin America, is based in Miami. This connectivity results in a very diverse population. Miami is the number one metropolitan area in the U.S. in Latino entrepreneurship and has the highest percentage of immigrant-owned businesses, according to our 2019 Global Startup Ecosystem Report.

This diversity has piqued the interest of programs and investors. 500 Startups, an early-stage venture fund and seed accelerator launched its operations in the heart of Miami. This group charges that Miami will become an inclusive and global hub for entrepreneurs and their ultimate goal is to connect South Florida, East Coast, and Latin America to support underrepresented founders.

Specifically, Miami’s startup ecosystem is seeing success in Edtech and Life Sciences startups. In fact, Miami is top 30 global ecosystem for Life Sciences. Miami’s Cambridge Innovation Center is home to almost 250 early and mid-stage companies and a wet lab for early-stage startups. Also, Startupbootcamp, one of Europe’s largest business accelerators, launched its first U.S. based program in Miami with a $2 million grant from the Knight Foundation. According to the Miami Herald, Startupbootcamp’s local program focus is to build Miami’s reputation in Life Sciences as well as its position as a launchpad into Latin America.

In regards to Edtech, Miami and its surrounding metropolitan area has several noteworthy startups. Hero K12 builds student behavior applications and received $150 million in 2017. Nearpod, a mobile app that enables teachers to create interactive multimedia presentations together with their students, raised $21 million in Series B funding in 2017. 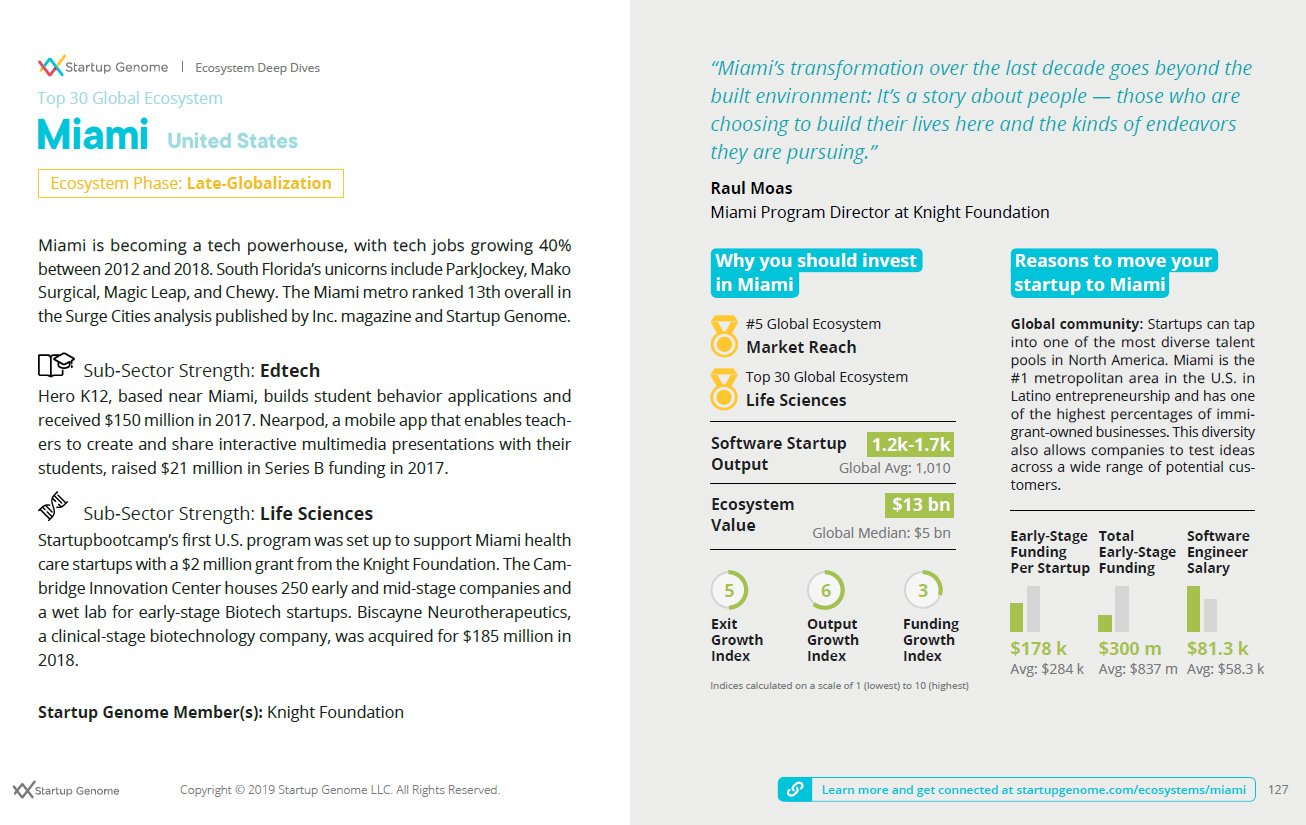 Some interesting data points from our 2019 assessment include:

The John S. and James L. Knight Foundation is Startup Genome’s member in Miami. The Foundation invests in journalism, the arts, technology, learning and impact. They recently announced a commitment of nearly $50 million in research to better understand how technology is transforming the U.S. democracy. The Knight Foundation is helping the Miami ecosystem by investing in efforts to connect and build ideas to accelerate the development of a startup culture.

“Miami’s transformation over the last decade goes beyond the built environment: It’s a story about people — those who are choosing to build their lives here and the kinds of endeavors they are pursuing,” Raul Moas, Miami Program Director at Knight Foundation, said.