Dane Stangler
on March 04, 2019
Houston is huge. The city — the city, not the metro area — is 600 square miles. Four other major cities (Chicago, Philadelphia, Baltimore, and Detroit), could all fit within it. The entire metro area expands over 10,000 square miles, which is larger than the state of Massachusetts.

Its size has done little to dent the region’s growth. The city’s population is growing about 10 times faster than Chicago’s, meaning it won’t be long until Houston is the third-largest city in the United States. From 2012 to 2017, the Houston metro attracted the highest number of 25-34 year olds in the country—one-third with college degrees. In comparison, other metros such as Chicago and Los Angeles, lost more people than they gained overall.

Houston is also a magnet for immigrants: one in four residents is foreign-born. At one point, “Houston accept[ed] more refugees than any other city in the country.” In our data, Houston has comparatively high shares of immigrant founders and foreign-born software engineers.

All of this growth has occurred without the region experiencing a loss of affordability. The cost of housing in Houston remains much more affordable than most other large cities.

Now, we can add the startup ecosystem to the list of areas in which Houston is experiencing growth in overall size and economic impact. Many of those thousands of people moving to Houston each year are entrepreneurs: in our survey last year, we found that 11 percent of Houston entrepreneurs had moved there from somewhere else within the United States, a much higher rate of National Entrepreneur Attraction than most other ecosystems.

In our Surge Cities analysis with Inc., Houston ranked 24th in Rate of Entrepreneurship. While the region has always hosted successful businesses, today the entrepreneurial energy is everywhere:

“The environment welcomes entrepreneurs, and not just those in the energy industry. The technology sector is booming, the restaurants and museums have garnered international respect, and bustling immigrant businesses stretch on for miles into the suburbs.” 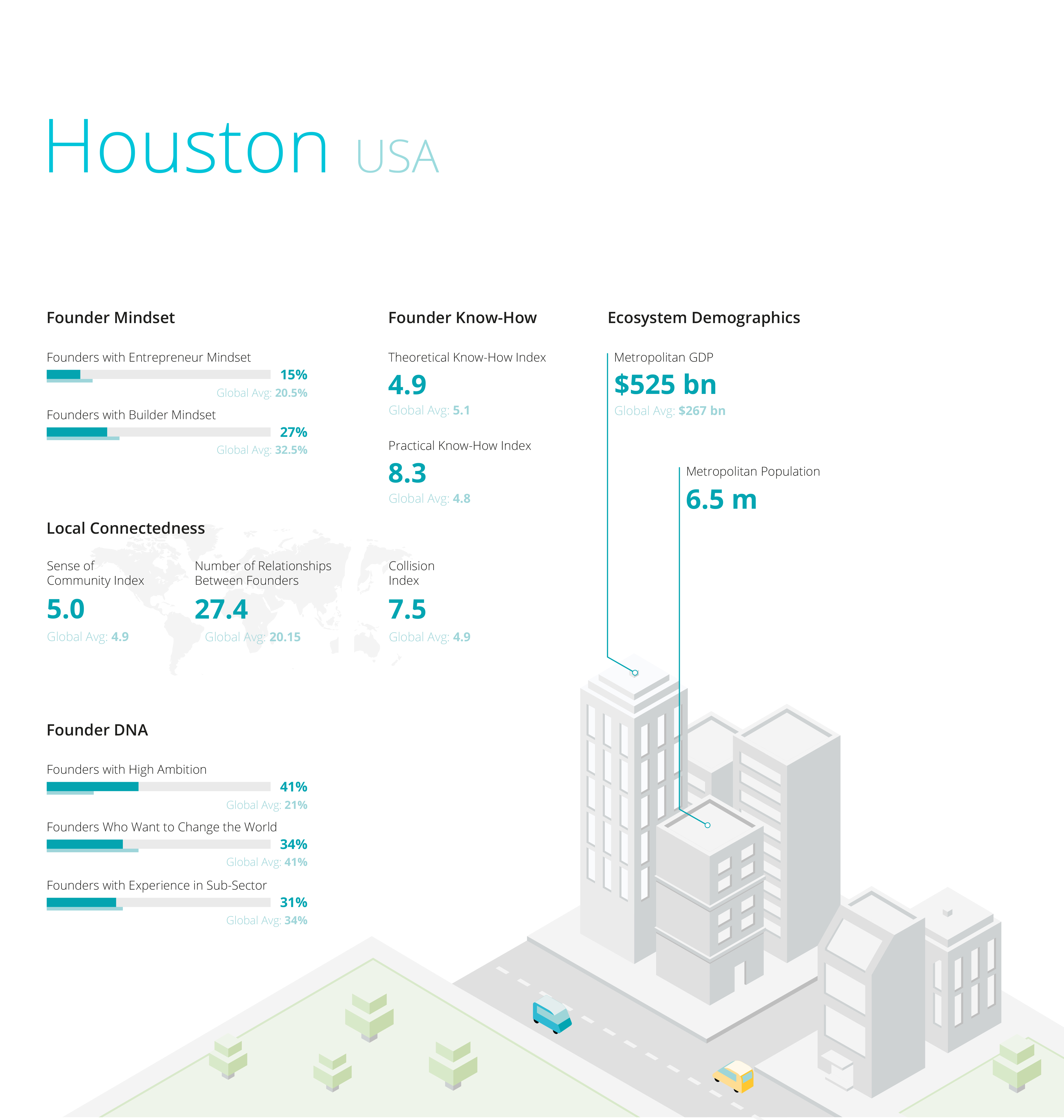 In our 2018 assessment of the Houston startup ecosystem, we found the region excelling on a number of dimensions:

These results reflect the hard work of organizations such as Houston Exponential and Impact Hub. The Houston region has also experienced a sharp increase in the number of startup support organizations and programs (SSOPs) opening and operating. (In an emerging area of research, Startup Genome will be able to offer “impact insights” to such organizations, telling them how much value they’re adding for startups along each of our Success Factors.)

We’re excited to showcase even more exciting results about Houston and dozens of other places in the forthcoming 2019 Global Startup Ecosystem Report!