In this member spotlight, see how Bahrain’s young startup ecosystem is coming to life in the Fintech sub-sector.
Sean Ludwig
on August 13, 2019

Bahrain took the spotlight in the startup world earlier this year when it hosted the Global Entrepreneurship Congress 2019 in April. The event gave the country a chance to show off its emerging startup economy to a much broader audience.

Bahrain is well known for being a world leader in getting its citizens connected to the internet. The latest Global Competitiveness Report published by the World Economic Forum ranked Bahrain third globally for the percentage of internet users by (98%), fifth globally in mobile broadband penetration rate (147.3%), and 10th globally for mobile penetration (158.4%). This naturally has helped encourage startup creation.

Another attractive aspect for startups is that Bahrain offers 0% corporate and personal tax, making it the most liberal tax regime in the Gulf. These government efforts have attracted entrepreneurs from other countries, with more than a quarter of Bahraini founders moving to the country from somewhere else.

When it comes to specific startup sub-sectors, Fintech is on top and showing momentum. This is partly due to Bahrain ranking first globally in Islamic finance regulation in the Global Islamic Finance Report. Another factor is that the Bahrain government reduced capital startup requirements from $50,000 to $100 for some businesses and introduced a regulation-exempt “sandbox” for Fintech startups, meaning it would be easier for startups to experiment and grow quickly.

EDB Bahrain believes Fintech will continue to attract attention for the years to come, with an “increasing rise of challenger banks, digital-only banks, and non-traditional, algorithm-powered lenders” coming on to the startup scene. It expects Gulf-based FinTech startups “to attract $2 billion in private funding over the next 10 years, compared to $150 million over the previous decade.” 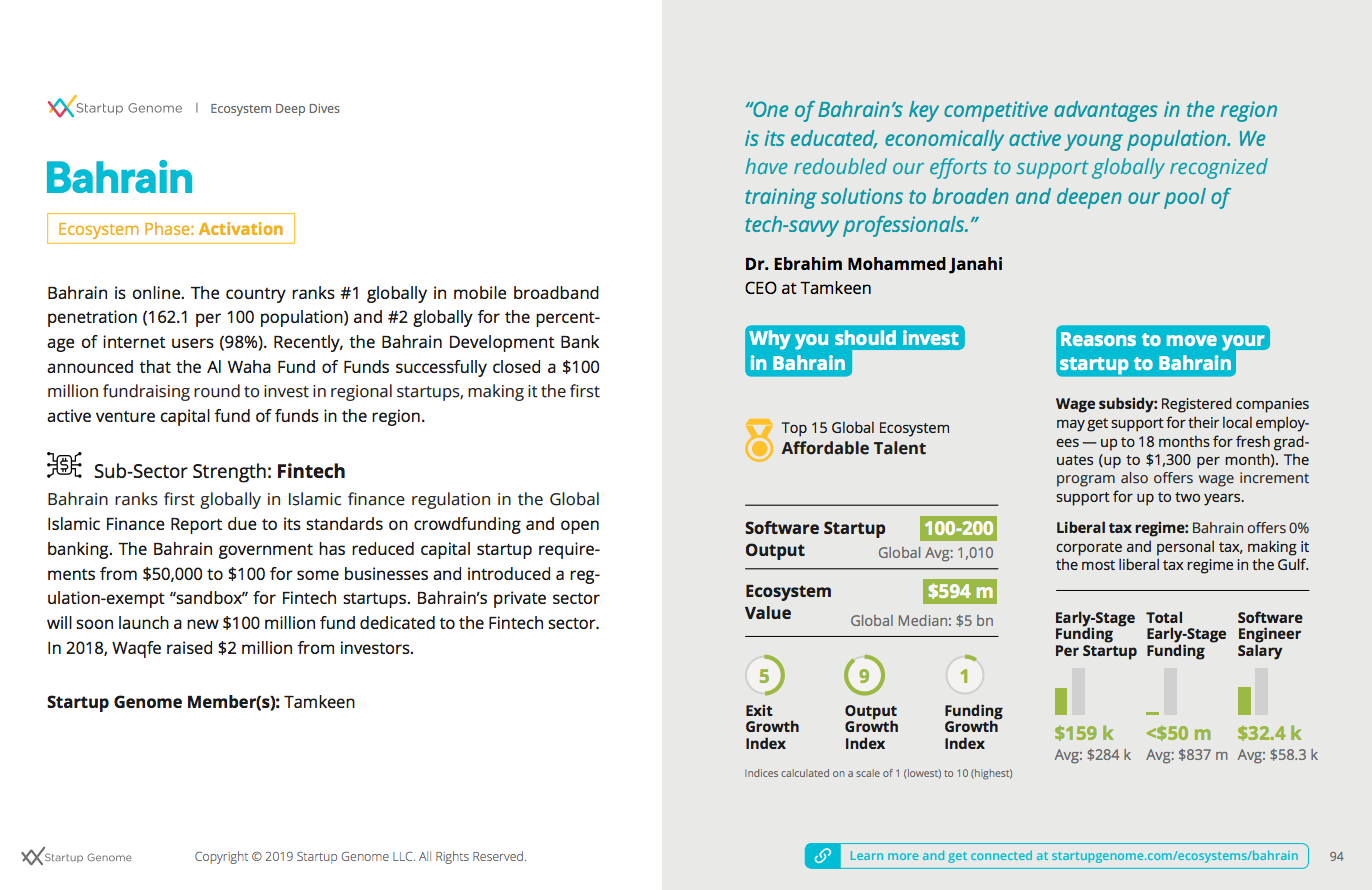 Other Bahrain startup ecosystem highlights from the 2019 Global Startup Ecosystem Report include:

Our local member in Bahrain is Tamkeen, a public authority established in August 2006 with the goal of supporting Bahrain’s private sector and playing a positive role in Bahrain’s Economic Vision 2030. Tamkeen has two primary objectives: 1) foster the development and growth of enterprises and 2) provide support to enhance the productivity and training of the national workforce. In fact, Tamkeen says it has created more than 330 different initiatives that have served more than 230,000 Bahraini individuals and businesses to date.

“One of Bahrain’s key competitive advantages in the region is its educated, economically active young population,” Dr. Ebrahim Mohammed Janahi, CEO at Tamkeen, told us. “We have redoubled our efforts to support globally recognized training solutions to broaden and deepen our pool of tech-savvy professionals.”

Do you want to get the word out about the startup ecosystem in Bahrain? Please get in touch with us about becoming a Startup Genome ecosystem ambassador!