The Rise of Startup Ecosystems: Silicon Valley vs. New York vs. London

(The original post can be found here on Techcrunch)

Falling startup costs have caused an explosion in the number of software companies being started. As a result, new startup ecosystems are springing up all over the world to support the success of these companies and jumpstart regional economic growth. Since startups are one of the biggest drivers of job growth and economic growth, this is a big democratizing force. Previously, most startups were located near Venture Capitalists in Silicon Valley, Boston and New York City, because as Paul Graham noted “when starting a startup was expensive, you had to get the permission of investors to do it.” Now companies are being started everywhere.

Entrepreneur magazine claimed “the overarching theme of SXSW this year was that you don’t need to be in Silicon Valley to do a startup.” With so many options, how do entrepreneurs decide where to start their company? What are the advantages and disadvantages of different ecosystems? And what are the characteristics that differentiate entrepreneurs across ecosystems?

There has been plenty of qualitative reporting about benefits of different startup ecosystems, but to date there’s been very little data to support these intuitions. One year ago, we started the Startup Genome Project to crack the innovation code and increase the success rate of startups. In September, we launched the Startup Compass, and have had more than 13,000 companies use this simple benchmarking tool to evaluate their performance, align their team and better allocate their product development and customer acquisition resources. As a result, we have now crossed the threshold of critical mass of data in the world’s top startup ecosystems to begin comparing them to each other. For the first time we now have the opportunity to create a Startup Ecosystem Index with a live pulse on how the world’s startup ecosystems are evolving.  As we’ve started to dig into the data we have begun to uncover valuable insights into the strengths and weaknesses of different startup ecosystems. As this study study progresses we hope it will yield insights for entrepreneurs deciding where to start their company, investors deciding where to allocate their capital, large companies looking for acquisition targets and policy makers who want to make their startup ecosystems flourish. The world is in need of economic revival and unleashing a Entrepreneurial Renaissance is our best hope.  Currently, the three most popular ecosystems worldwide are Silicon Valley, New York City and London. And today, we are releasing 22 insights on how they compare.

Defining Characteristics of Each Ecosystem:


These insights are part of a new Startup Genome research initiative on Startup Ecosystems, in which we will be releasing regular mini reports on new startup ecosystems as we receive a critical mass of data. We've brought on two brilliant researchers to work on this project: Danny Holtschke from Maastricht University and Jessica Richman from Oxford University.

Here is a list, in ranked order by average throughput, of what we’ve found to be the 25 most active startup ecosystems around the world. 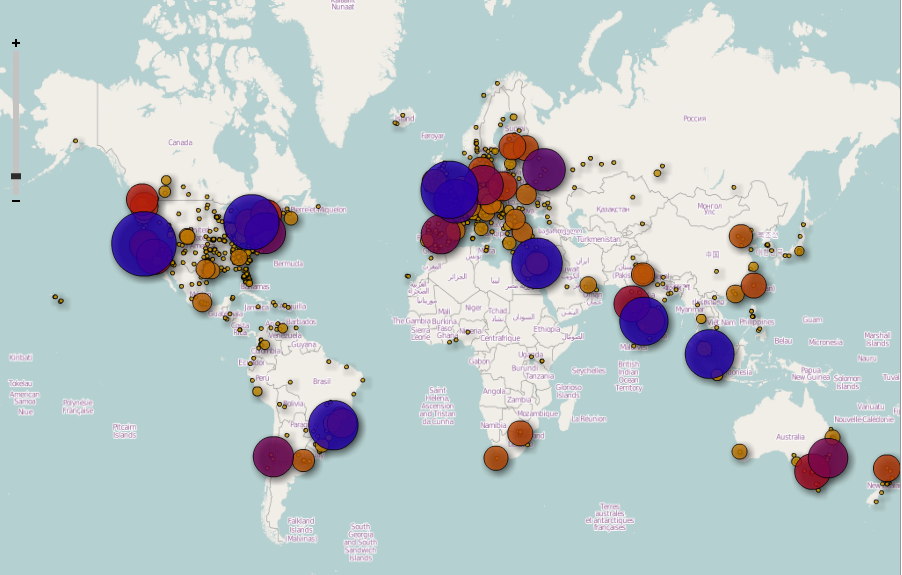 To reach the critical mass needed to analyze these burgeoning ecosystems, we are partnering with local media outlets who can help us get enough entrepreneurs in their area to sign up for the Startup Compass and contribute to the Startup Genome. In exchange we are offering them exclusive early access to data they can share with their ecosystem.

We have a number of great supporters already including Endeavor, Mamstartup in Warsaw,Startupi in Sao Paulo, SGentrepreneurs in Singapore, and Startup America & Microsoft BizSpark in other cities around the world. We'd love to find local support for each of these ecosystems. If you are interested or have any suggestions please contact us at [email protected] There is so much more we'd like to do with this project but we are a start-up ourselves and our resources are limited, so we are also opening up the opportunity for a few sponsors to underwrite some of research and development costs of the Startup Ecosystem Index in exchange for appearing on the reports. To date our research reports have been downloaded more than 25,000 times and have been covered in over 100+ blogs and publications in more than 15 languages. We'd love to have a vision aligned company help us create even more impact. If you are interested or have any suggestions please send us an email at [email protected] We hope you are as excited as we are about the potential of this project to further democratize entrepreneurship around the world. And if you run a software company, do check out the Startup Compass. In addition to helping you make better decisions, you will be contributing to generating insights that can allow startup ecosystems everywhere to flourish. If you would like receive the full Startup Genome Ecosystem report once it’s released you can sign up here.

Finally, we'd like to share what a few friends in Silicon Valley, New York City and London had to say about their startup ecosystem:

"People in Silicon Valley really believe in "pay it forward". It's not all transactional and tit-for-tat. Folks help each other and those not as far along as them. It's also very accepting of failure; if you have some real catastrophes on your resume, that's considered a badge of honor - there are not a lot of places on the planet that's true. It's also the easiest place in the world to start a company. Everyone is here to help you kick ass. :) "

I moved my first company, Tickle.com, from Boston to San Francisco in 2000.  As a Boston-area native, I feel like most people from back east are highly protective of their ideas. I was amazed to find people in Silicon Valley to be openly sharing ideas, even if another entrepreneur may steal it. It took me several years to really get it.  Silicon Valley is full of great ideas, but ideas are cheap... and execution is the hard part. If you think you have a great unique idea, I'd bet 5 other people in Silicon Valley already thought of it.  It's because we share ideas, we riff off each other and sometime great companies are born.  But the key to taking a new born idea to an IPO is the ability to execute. Silicon Valley has the best combination of factors to provide for that success including the highest concentration of VC's, highest density of tech entrepreneurs and engineers, great schools pumping out more smart grads every year, countless hugely successful VC-backed world-changing companies, pride in a merit-based system that rewards intelligence and hard work and above all... an attitude that supports collaboration to build incredible things.  It's extremely hard to replicate all of that in another location, especially the belief that we, in Silicon Valley, can change the world through innovation.

The diversity and multicultural nature of the London startup ecosystem both in terms of startup founders and those working in startups makes London a vibrant and exciting place to be. My own startup Enternships.com is comprised of people of various nationalities including American, Iraniana, Romanian, Indian, Chinese as well as British, which enables us to share insights from different parts of the world whilst working towards a common vision.

London also provides a great base to access global markets - with Europe on your doorstep and strong global communications links and a relatively smaller pool of people (compared to Silicon Valley) working on similar issues you have a better chance of standing out, being recognised and ability to access emerging economies.

The beauty of the London startup ecosystem is that all parts of the startup value chain are worldclass: Universities and research institutions as an innovation engine, successful entrepreneurs and angel investors act as mentors, a financing ecosystem that ranges from early to late stage, creative input and thinking from all of the arts, tech companies and large industry, and finally some of the world’s leading media companies. There are few places in the world that can claim this combination of assets to be natural, and while there are still lots to work on, the breadth of startups in London is a testament to these origins.

BraveNewTalent currently has it's HQ in London but also has an office in Silicon Valley and Bangalore. There is a cluster of tech talent in all three locations. We chose to locate our development team in London so we could compete better for the 50X engineers than we could in the Valley.

In London there is a fantastic network of peers among the other tech Founders. I find the community hugely helpful.

People always speak about Europeans being less risk friendly due to cultural reasons. I believe this is too superficial. Entrepreneurs are less risk friendly because the market favors this behaviour. In Europe you have the same downside as a startup in the US but in case things go right you will face a slower and thus smaller upside than you do in the US. Europe is fragmented into countries with their own markets, cultural behaviours, media and language. This slows things down to the extent that startups have to treat countries with populations of only 8 million with their own market entry strategies. This fundamental difference in the system creates market dynamics that favor behaviour that seeks to limit downsides (e.g. skipping product/market search aka cloning).

The only way out of this is to think global and act global from day one. In Europe, London may be the only place that provides that kind of international uplink . But London is more than that. London's strength is that it is more than "just" a web-tech startup hub. It is one of the most important cities in dozens of industries: finance, media, advertising and fashion to name a few. This creates an environment that's very special and unique in London.

I believe NYC is the most diverse ecosystem of all these three cities. It has a quickly growing startup community, the access to capital and the talent pool, but at the same time it is also the home of big media, of style, of finance. Above all, NYC is very supportive of entrepreneurial initiatives and ideas.

It wasn't a strategic decision, but all three co-founders ended up in NYC. We have been considering to move the company to SFO, but believe that because our company is at the intersection of sustainability, e-commerce and design, it makes more sense to be in NYC. Plus, we just love it here ;-)

NYC has key assets for the founder with vision beyond the start-up realm to leverage:

It may have been the case thus far that entrepreneurs have been overshadowed by Wall Street, but as the Mayor has indicated, Silicon Alley is strategically & geographically well positioned for more startup capital & resources.