How Seoul Is Actively Working to Create a Larger Startup Ecosystem

Seoul is the heart of startup activity in South Korea, with nearly 60% of Korean startups located in the city. Numerous startups incubators are based there, creating an ecosystem value of $5 billion. It also has more than 50 universities, which provide a lot of fresh talent to startups.

Our Member Seoul Metropolitan Government has been working recently to invest in building a more robust startup ecosystem for Seoul, with a view of opening its doors to people from all over the world.

“We want to build a globally open platform city where anyone can make a business, can open a startup, can invest, or can get support for their talents,” In Dong Cho, Deputy Mayor for Economic Policy for Seoul Metropolitan Government, said. “We will link people and organizations and open up our society. We want to invite many talents into our cities. Going global is a necessity, not a choice.”

One reason startups are so important to the Seoul Metropolitan Government is that it wants to be less dependent on large companies South Korea is known for, including Samsung and Hyundai. Building up new industries and new companies can protect the economy from slowdowns as well. 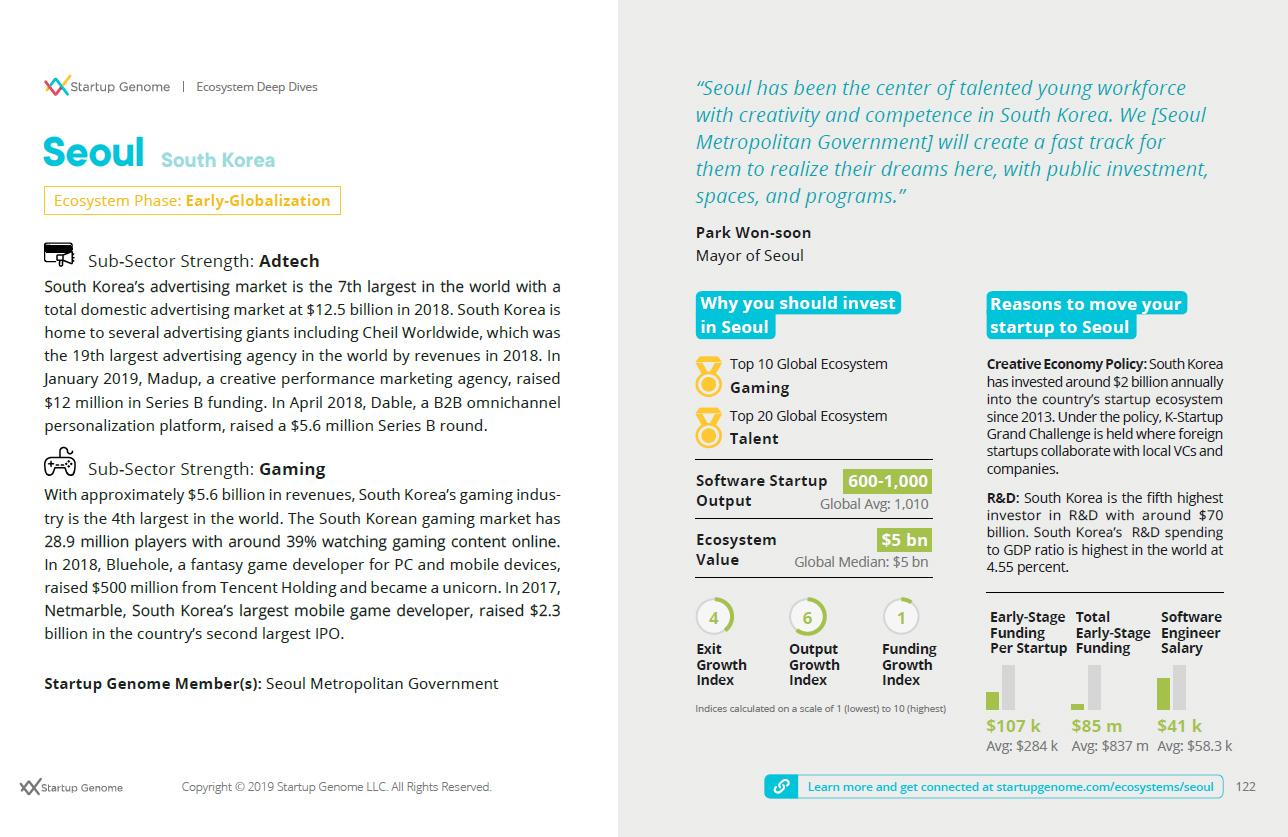 Cho from the Seoul Metropolitan Government looks to organizations like Startup Genome to help measure the impact of their current initiatives, since most are focused in the long term. Without good data, they can’t make proper decisions.

“We need data to diagnose our systems — our strengths, weaknesses, and opportunities,” Cho said. “If we have real numbers, we can improve strategies and set up more effective tactics. Data can be a tool to innovate all of our systems.”

Cho said that one of the most important keys to success for cities like Seoul will be to learn from other cities. Global Connectedness, which documents how well founders are meaningfully connected to founders in other ecosystems, is becoming a priority.

“We are living in cosmopolitan settings and most cities have similar challenges and tasks,” Cho said. “We can learn from each other and some strategies can be implemented on a smaller scale. It can be meaningful for us to benchmark and exchange and learn from each other.”

On a final note, to those looking at Seoul as a potential place to start a new company, Seoul Metropolitan Government says it wants to focus on three primary areas for startup development and attraction: AI, Fintech, and Life Sciences.

For AI, they believe AI startups can take advantage of existing strong IT infrastructure. For Fintech, Seoul makes sense because it is one of the top financial hubs in the region and the government will be building a new fintech lab soon. For Life Sciences, they want to capitalize on the high volume of Korean youth in medical school as great candidates for working for biomedical companies.

In every case, Seoul’s key decision makers are aware that economic development through startups and innovation will be driven by the interaction amongst all parties involved: from young talent, founders, corporations and investors. Their goal is to strengthen the whole ecosystem.