In our member spotlight, we explain how the world’s fifth largest city has grown as a startup hub for multiple growing sub-sectors.
Sofia Kousa
on December 03, 2019

Brazil’s tech sector has grown at a rate of more than 20% in recent years, and naturally, the largest city in Brazil — São Paulo — is gaining attention as part of this. On top of this, São Paulo has one of the best ecosystems for startups in Latin America. It’s no wonder that giant tech companies like Google have gained an interest in the area.

Startup Genome’s 2019 Global Startup Ecosystem Report identifies São Paulo as one of the top 10 global ecosystems for affordable talent, with graduates flooding in from several leading science and technology universities. One of them, University of São Paulo (USP) was ranked as the #1 South American university in 2019. In addition to emerging young talent, the Brazilian federal government helps startups grow by offering a variety of exemptions across income, import, and export taxes, as well as on manufactured products.

While São Paulo has a lot of startups in different sub-sectors, Fintech and Life Sciences are especially notable. In the Life Sciences sub-sector, São Paulo is blooming. The city hosts Hospitalar, one of the biggest Healthcare trade shows in the world. The event attracts 85,000 professionals from more than 50 different countries.

In addition, Brazil is the largest Healthcare market in Latin America, with more than $42 billion spent each year on private healthcare. One notable Life Sciences startup is Memed, an online platform for e-prescription services, which raised $3 million in Series A round in 2017.

In addition, São Paulo’s Fintech startups are making great strides. The Brazilian Fintech market is projected to generate $24 billion in revenue in the next 10 years. São Paulo is Brazil’s financial center, hosting approximately one-third of the country’s banks and accounting for one-third of credit transactions. Plus, the city is also home to one of the largest stock exchanges in the world.

One notable Fintech startup is Nubank, a digital bank that raised $150 million and became a unicorn in 2018. Another startup, StoneCo Ltd, a credit-card processing company, raised $1.1 billion in 2018.

Other São Paulo startup ecosystem highlights from the 2019 Global Startup Ecosystem Report include: 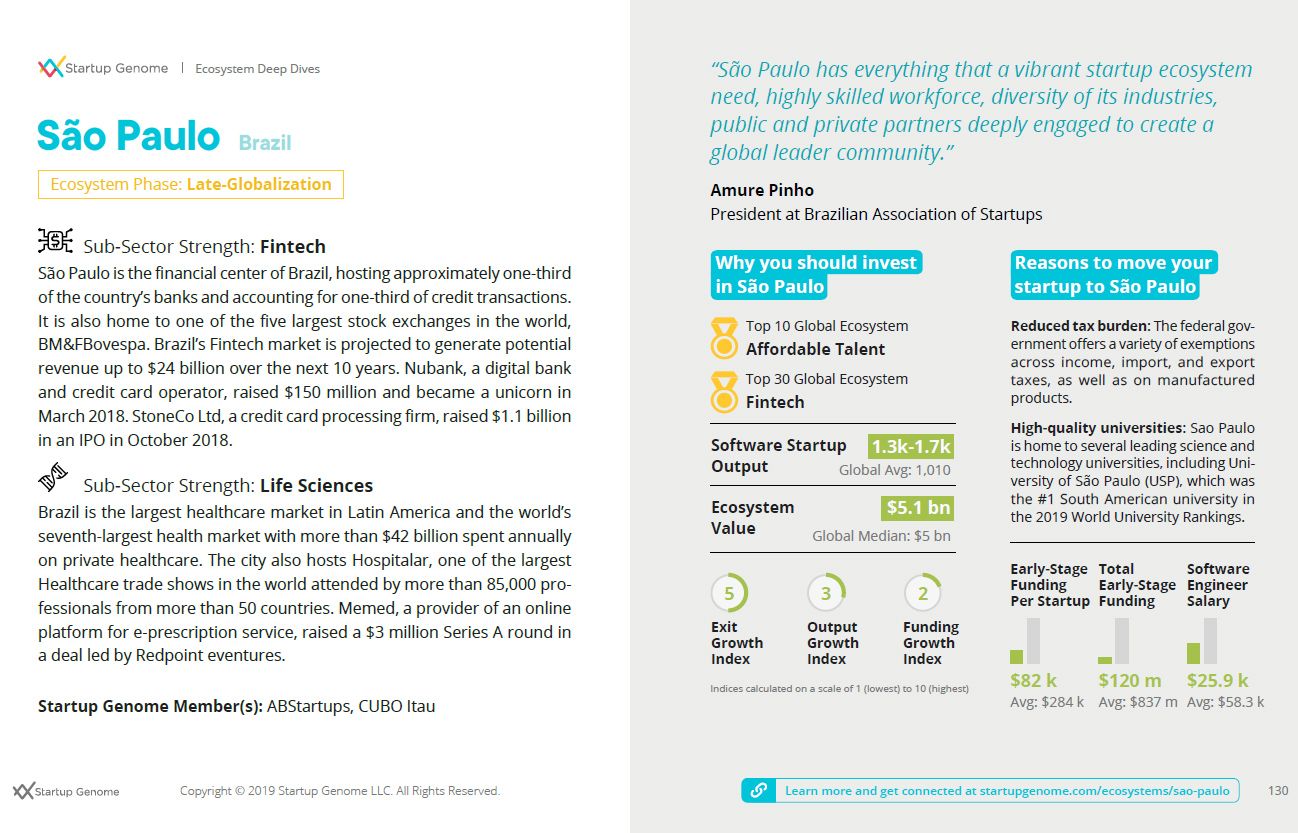 Our local members in São Paulo are Abstartups and CUBO. Abstartups is a non-profit that works to make Brazil one of the largest powers in technological entrepreneurship and innovation. It is the main institution that represent startup ecosystems in Brazil. CUBO is a tech entrepreneurship hub founded by Itaú Unibanco. Its goal is to connect entrepreneurs, investors, corporations and universities to innovate, collaborate, and challenge the status quo.

“São Paulo has everything that a vibrant startup ecosystem needs — a highly skilled workforce, diversity of its industries, public and private partners deeply engaged to create a global leader community,” Amure Pinho, President at Brazilian Association of Startups, said.