São Paulo is Catching the Eye of Investors and Entrepreneurs

São Paulo hosted a Startup Genome Startup Agora Dinner where an esteemed group of ecosystem builders discussed the talent issues in the city. Here are the highlights of our optimistic discussion.

600 billion dollars, the GDP of the State of São Paulo, represents one third of the Brazilian GDP. The city of São Paulo is among the 10 largest economies in the world and a major change has been taking place in recent years, creating a favorable environment for startups.

Unicorns
Six unicorns emerged in 2018 and three more were founded in 2019. With this jump-start, a new era started and Brazil was one of the countries where the most unicorns were born in 2018. Most of the unicorn founders are alumni of the University of São Paulo Polytechnic Engineering School, the number one university in the 2019 World University Ranking, which has 55,000 undergraduate students and 30,000 graduate students.

Although unicorns represent only a small proportion of entrepreneurs, this movement indicates a positive trend for startup development.

São Paulo has a mature startup support ecosystem. The city is the largest ecosystem in South America and is now attracting the attention of foreign investors and entrepreneurs. In 2018, about 76% of all venture capital invested in Latin America went to Brazil. Softbank, the Japanese telecommunications conglomerate, announced in 2019 a $ 5 billion fund for Latin America, and said its goal is to invest in up to two startups a month in the country. Also, Kaszek Ventures has recently raised $ 600 million and the majority of its startup investments are in Brazil. 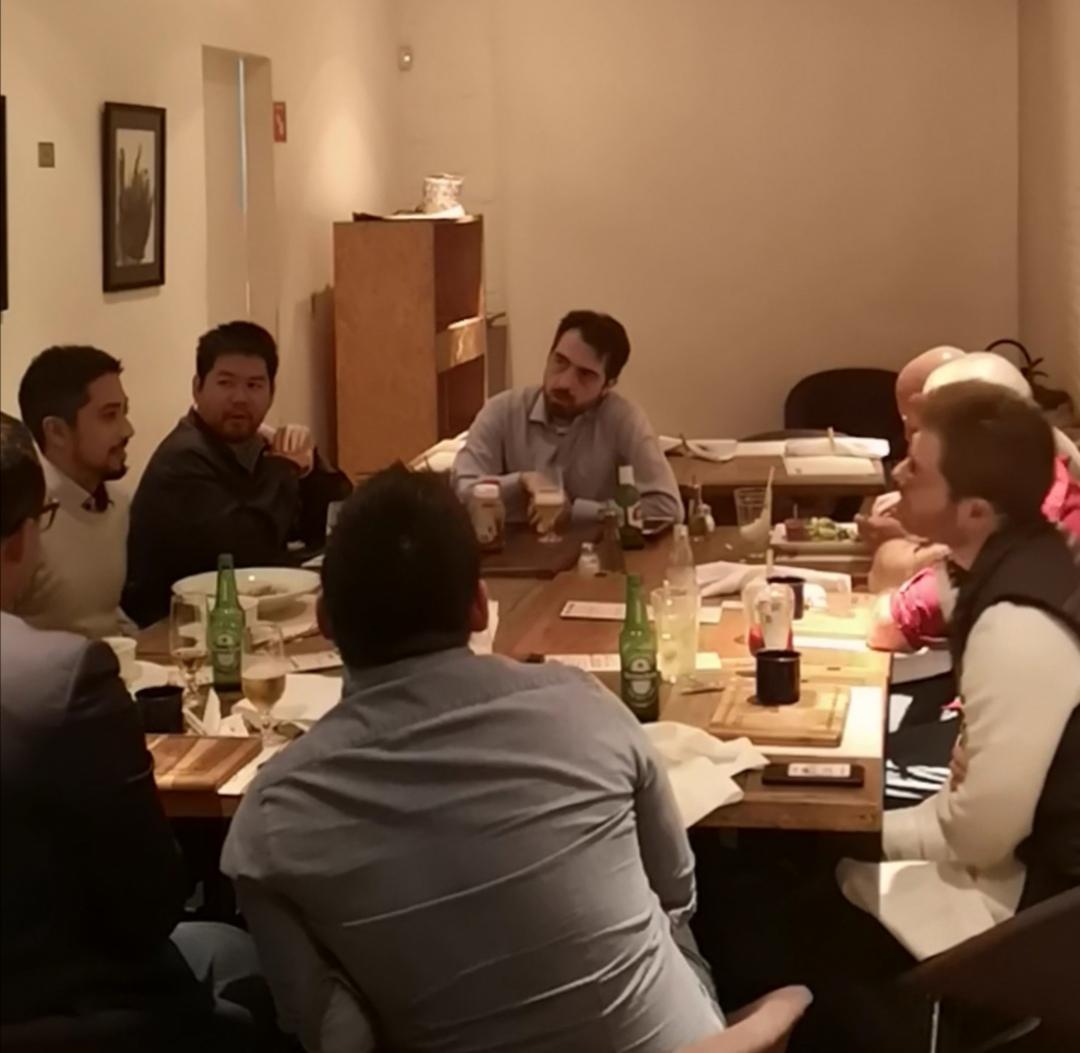 To meet the growing demand for new talent, FIESP, the Federation of Industries of the State of São Paulo, is establishing partnerships to offer courses, workshops, technology research development and other initiatives. In addition, FIESP has been including entrepreneurs and students together on hackathon teams.

Among other initiatives that contribute to the development of new talent, The District, an innovation platform that includes an investor network, vertical coworkings, reporting and other initiatives, mapped 100 super founders, bringing an analysis of successful entrepreneurs who are changing the national scene.

On the public sector side, Invest São Paulo, an investment promotion and competitiveness agency, is running the SP Conecta Cidades program, which involves holding meetups in cities with less local ecosystem development. By bringing investors, entrepreneurs, and executives to these venues, event attendees gain access to potentially transformative content and networking. The speakers, who usually work in the city of São Paulo, have access to a new market, which may result in new partnerships, investments, or clients. This program has contributed to the development of entrepreneurs and the startup ecosystem in several cities.

In addition to initiatives to increase the available talent base, in the Global Startup Ecosystem Report 2019 ranking, São Paulo ranks top 10 in talent affordability based on software engineer wages. 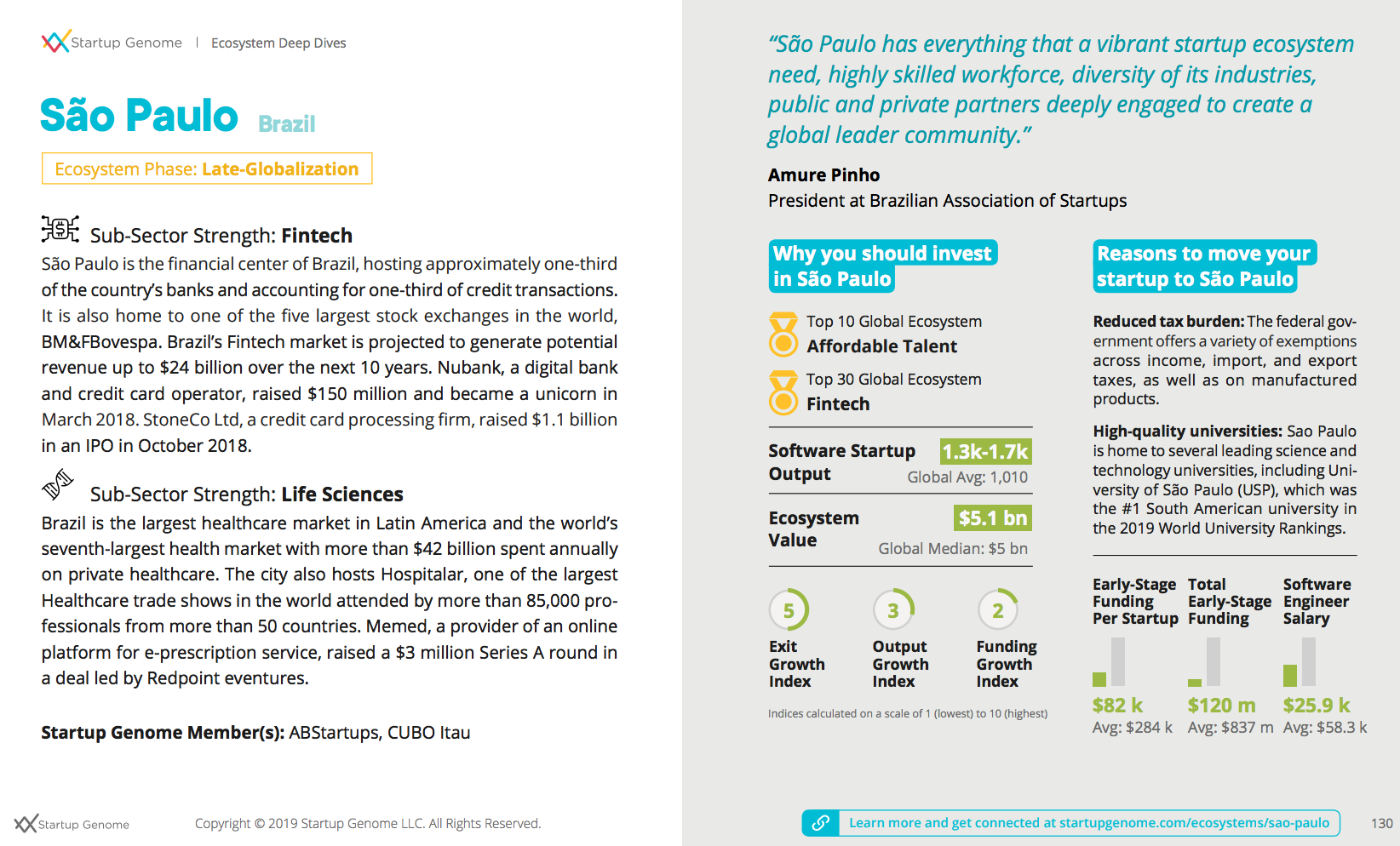 The most prominent local startups belong to the Fintech segment, including startup Nubank, which has already achieved a decacorn valuation. The city is the country's financial center, with the largest banking institutions in the southern hemisphere, and is the Latin American business hub where 65% of Fortune 500 companies are headquartered.

In various segments, age groups, and situations, we have seen stories of learning and personal transformation through entrepreneurship. For this reason, São Paulo is the city that many entrepreneurs and investors are choosing to be in.