Our next installment of the female founder series highlights New York City for being filled with organizations and events for female founders
Laís de Oliveira
on September 09, 2019

New York City is known for a lot of things; The Yankees, Empire State Building, Broadway, pizza and for being a melting pot of different cultures around the world. It’s no surprise that NYC has a diverse startup scene as well. According to Startup Genome’s research, New York City ranks as a top 5 ecosystem for female founders, with a rough estimate that 23% of local startup founders are women.

The fact that NYC has one of the highest startup outputs in the world (calculated as the total number of software startups in an ecosystem) makes it even more impressive. Achieving this position in one of the top 20 startup ecosystems in the world indicates that there is critical mass of female founders which can influence other high ranked ecosystems, such as Silicon Valley, where the 16% representation of female founders is under the global average. NYC not only demonstrates diversity it is possible, it is leading the way.

One noteworthy NYC female founded startup is By Chloe, a fast casual vegan restaurant chain, that has raised $31 million in funding from investors such as Collaborative Fund, Bain Capital, Jason Finger, Paul Appelbaum, and the Kitchen Fund. The largest female founded startup in NYC for 2018 was Class Pass, a subscription marketplace for finding and booking fitness classes. They have raised $85 million in Series D funding led by Temasek. 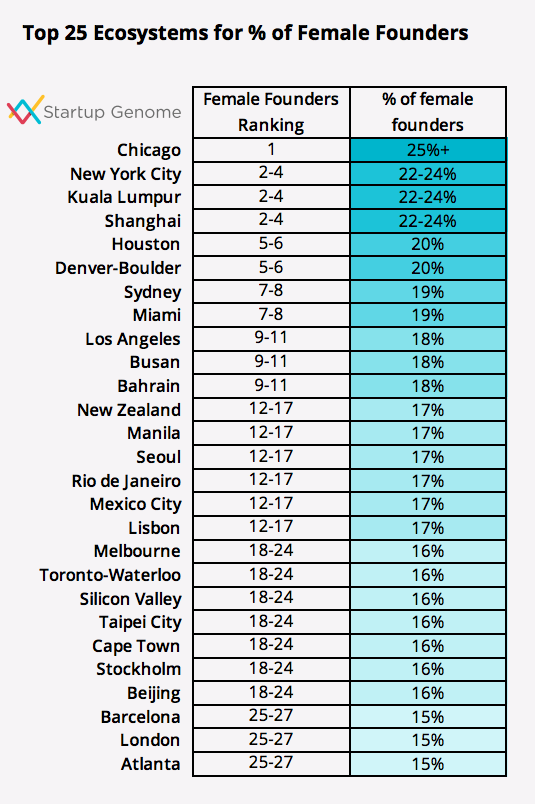 Non-profit Resources
The NYC government plays an active role in the success of women led startups. Women.nyc is a NYC government initiative that gives women tools to succeed in their careers and businesses. They aim to be a program that ensures that NYC remains one of the top places for women to launch startups.

The women in NYC who need help with starting or growing a business have a long list of organizations and initiatives to choose from. One of these is WE NYC, launched as a partnership between the City and Citigroup to support women entrepreneurs in underserved communities.The initiative has four branches: WE Connect, WE Fund, WE Legal, and WE Master each designed to support in different stages of business growth.

Another organization, Women’s Business Center (WBC) offers business training, counseling and financing resources to women looking to start and grow their businesses. WBC believes that by educating and empowering underserved women entrepreneurs, they are contributing to the economic, cultural and social spirit of the community.

Membership Organizations targeted for Women
There are a lot of different membership organizations around NYC that are specifically created and targeted towards women. The New York Women’s Chamber of Commerce was New York’s first women’s chamber created in 2002. It is dedicated to assist women to achieve success and economic independence through self-employment and business ownership.

The American Business Women’s Association’s NYC branch unites professionals of all different backgrounds and occupations to develop personally and professionally. They offer support in leadership, networks, and volunteer opportunities within the NYC area.

Additionally, The Tory Burch Foundation consists of programs and initiatives that are focused on helping women-owned small businesses. They provide access to capital through their capital program, which is offered through a partnership with Bank of America. Also, their 10,000 Small Business program in partnership with Goldman Sachs provides business and management education. Lastly, the Tory Burch Foundation offers mentor and network opportunities.

Access to Funding
The Female Founders Fund is an early-stage fund that invests in the exponential power of female talent. They make small investments in seed-stage opportunities. The fund was founded in 2014 and has received recognition for investing in female-run internet and software startups all over the world.

Another investment fund is BBG Ventures, which invests in companies that have at least one female founder. They believe that the greatest untapped opportunity for venture capital lies in backing women who are using technology to address common life-challenges and transform daily habits.

Project Entrepreneur, provides women access to tools, training, and networking to build and grow impactful companies. The women are provided with multi-city events, a 5-week accelerator program and a digital hub. The top 200 applicants are invited to NYC for a venture competition.

In March 2019, NYC launched a month long campaign for Women’s History Month called “Shop Women Owned NYC” a partnership between the city and American Express, according to Forbes. The goal of the campaign was to address the gender gap between business growth in companies owned by men and drive traffic towards the women led stores.

These conferences and events create a domino effect. They gather around a crowd of eager women looking to succeed, who go on to inspire others in their inner and outer circles, which ultimately leads to more women starting their own endeavors.

Are you from New York City and working to improve the entrepreneurial journey for women? We’d like to hear from you! Email [email protected] and let’s talk.