How Atlantic Canada is using natural assets and ingenuity to become a top startup ecosystem.
Sara Bettoni
on December 05, 2019

The Atlantic Canada startup ecosystem has been consistently evolving during the past eight years. Entrepreneurs and organizations across the spectrum have founded new companies, incubators, accelerators, and investment funds. As a result, Atlantic Canada’s economy has grown, generating more than $2 billion in startup exits since 2012.

Activity in Atlantic Canada — the region of Canada comprising four provinces located on the Atlantic coast (excluding Quebec) — is mostly centered in Halifax, the capital of Nova Scotia. The local government there is working on provincial strategies to increase the country's wealth and GDP value. Outside of specific university and organization commitments, such as the Creative Destruction Lab that fosters the creation of powerful technology ventures through strategic alignment with Dalhousie University’s research initiatives, the Halifax’s Economic Growth Plan must be mentioned.

This is a long-term vision program that aims to grow Halifax’s population to 550,000 and its GDP to $30 billion by 2031. The plan wants to take advantage of Halifax’s position close to the sea and close to urban and rural lifestyles to make it a more vibrant and welcoming city. The plan has several strategic goals, such as directing social actions toward Halifax’s shared economy. 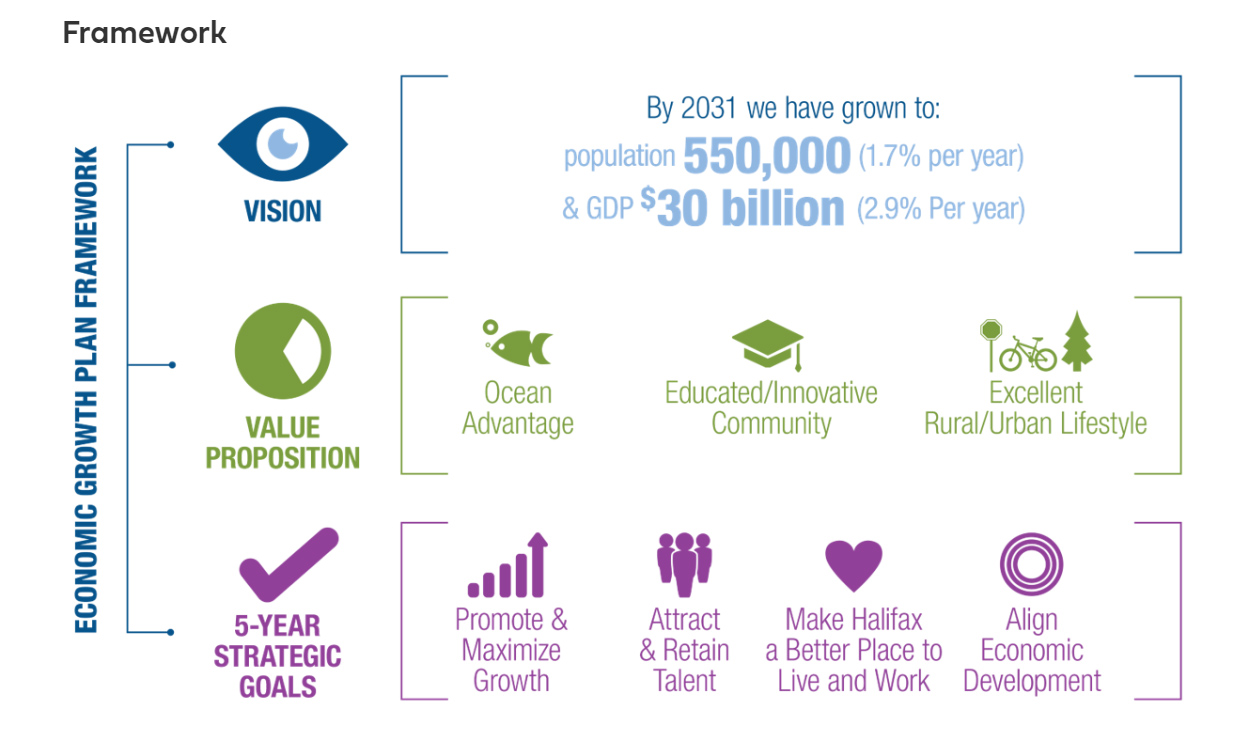 Atlantic Canada offers a robust ecosystem in Life Sciences, Marine Tech, IT, and AgTech. According to the Financial Times Group’s fDi Benchmark, Halifax is the third most cost-effective location for operating a Life Sciences research center in Canada and the U.S. It has produced large deals, such as Ocean Nutrition’s $540 million acquisition and ABK Bioscience’s $30 million Series B roundin 2019. Atlantic Canada is also home to Dalhousie University’s Life Sciences Research Institute, an integrated facility for scientists, students, and entrepreneurs, and Charlottetown’s $30 million BioCommons campus.

Life Sciences companies are also central to Canada’s agriculture and agri-food sectors. To support these, the government has invested $5.4 billion in 2016-2017 — 24.2% of agricultural GDP — while public funding is estimated to total $557 million.

Besides Life Sciences, Atlantic Canada is also investing in ocean research and marine programs. Canada’s Ocean Supercluster, which features more than $300 million in R&D spending from private and public sectors, is headquartered at Dalhousie University. This is one of the best research centers for ocean-focused research and it aims to make Canada a global leader in the knowledge-based ocean economy. The region also includes the Centre for Ocean Ventures and Entrepreneurship (COVE), a collaborative space for ocean-related innovation, and the Ocean Frontier Institute, which leverages Dalhousie University’s ocean research activities.

One of the reasons why Atlantic Canada is growing more is the local government’s presence in active projects and programs. Not only does it provide funds for AgTech and ocean research development, but it’s also trying to create fertile ground for investment.

The Innovation Tax Credit allows companies and investors — for investments of up to $250,000 — to receive a tax credit of 45% for businesses in Marine Tech and Life Sciences. Canada’s immigration policies are also make this an attractive region for foreign talent. Policies, such as the Atlantic Immigration Pilot, make it easier to study, work, and live in Atlantic Canada. It helps hire foreign nationals for jobs they haven’t been able to fill locally.

Some other interesting data points about the Atlantic Canada ecosystem from our 2019 assessment include: 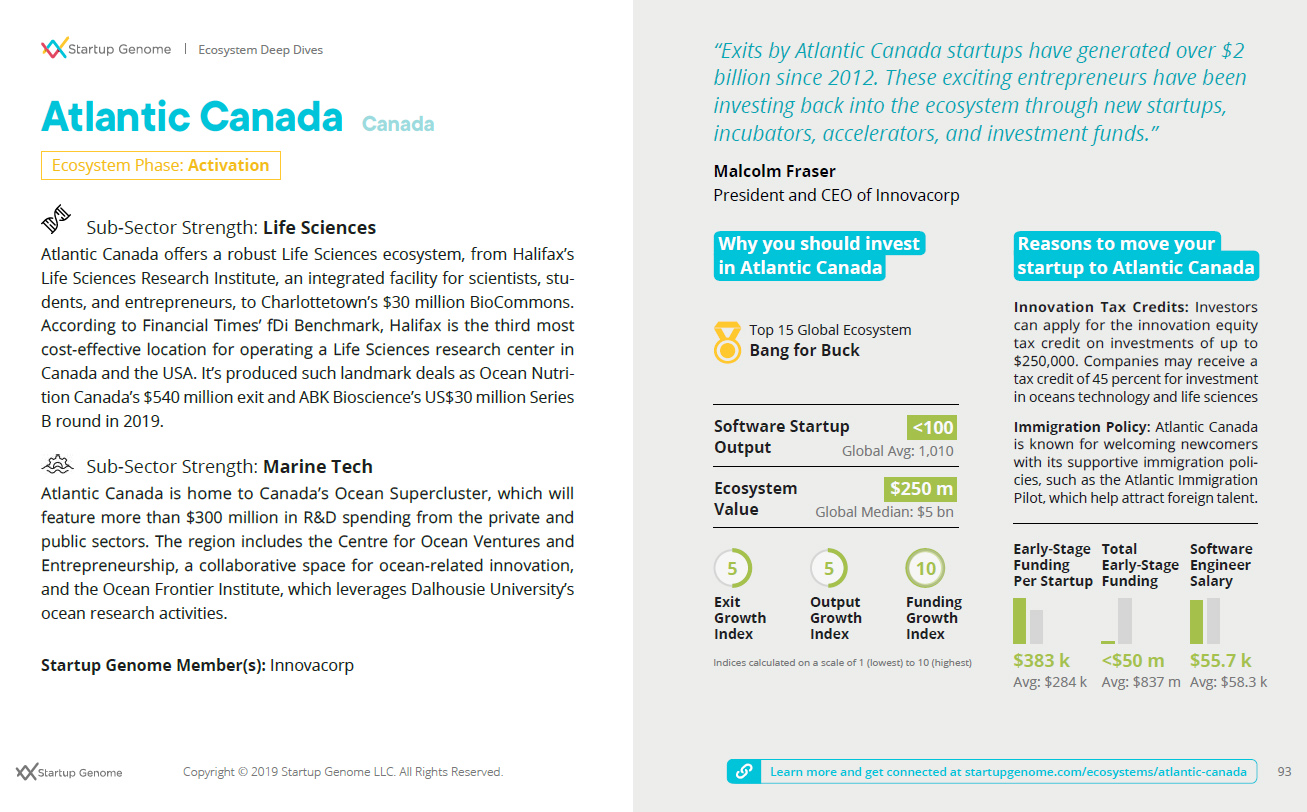 Our member Innovacorp is an important organization in Atlantic Canada. Established in 1995 and based in Halifax, it’s an early-stage venture capital organization that fosters new investments that give entrepreneurs access to world-class incubation facilities, advice, and support. Innovacorp’s vision is to make Atlantic Canada one of the top 10 startup ecosystems in the world.

“Exits by Atlantic Canada startups have generated over $2 billion since 2012. These exciting entrepreneurs have been investing back into the ecosystem through new startups, incubators, accelerators, and investment funds,” Malcolm Fraser, President & CEO of Innovacorp.

Want to be more involved in the Atlantic Canada startup ecosystem? Become a Startup Genome Ambassador! Please get in touch to find out more.